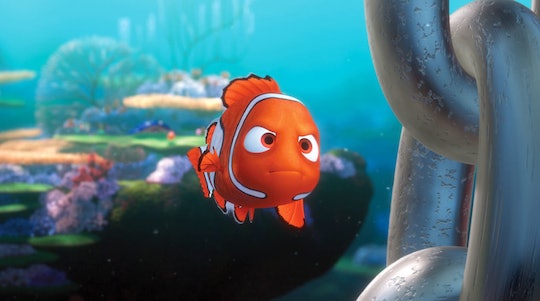 Struggling to find ways to fill up the days and occupy your little ones? Well, you can definitely keep your kids busy with Pixar's Finding Nemo drawing for at least a little while. The drawing shared on Pixar's Twitter page will have your kiddos literally finding little Nemo somewhere in the sea between Crush, the 150-year-old sea turtle, his adorable son Squirt, and, of course, Bruce the shark, aka leader of Fish-Eaters Anonymous.

"Can you find Nemo?" Pixar captioned the Finding Nemo drawing that features some familiar characters like Nemo's stingray teacher and schoolmates, Nigel the Pelican, and Peach the Sea Star.

Parents of bored little kids stuck at home can either print off the photo or zoom in on it to find the tiny clown fish on your phone or computer. It's pretty difficult, so it should eat up a good chunk of your time. And, heck, once you spot Nemo, why not ask your kids to find some of their other favorite Finding Nemo characters. You can even play a little game of I-Spy.

Maybe even sign into Disney+ to watch the Pixar movie as a reminder, which should eat up another few hours.

Once you've fully exhausted Pixar's Finding Nemo drawing, Disney has more ways to help parents keep their kids entertained and engaged. For example, Disney is offering a free interactive course on how to become a mini Disney imagineer, called Imagineering in a Box. Offered through the Khan Academy, the course teaches kids how to build their own Disney characters and magical worlds with technology.

Disney+ has also released some of its content earlier than expected, such as Frozen 2 and Onward. So when you're done finding Nemo with the kids, you'll still have loads of options courtesy of Pixar and Disney to fill your day.