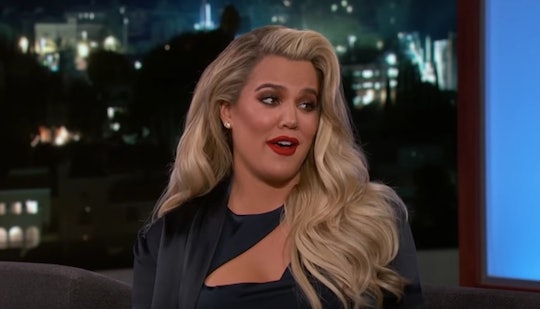 Although we all had to wait months before rumors about Khloé Kardashian's pregnancy were confirmed, once the news was official, the reality star was all about sharing her feelings about the experience. As was to be expected, Khloé Kardashian's quotes about pregnancy are hilarious, down to earth, and way too real. Khloé has always been the one sister with absolutely no filter at all, so with all the changes happening to her body and her life, it was basically a given that she'd be outspoken about what was going in her life.

She definitely was, too. Whether it was about being excited or scared about becoming a mother, shutting down body-shamers who couldn't help but comment on her growing bump, or dishing about her cravings, Khloé was as much of an open book as she could be.

Her quotes about pregnancy were in stark contrast to her little sister Kylie Jenner, who basically went into hiding after the rumors broke about her pregnancy around the same time as Khloé's. Kylie spent the entire nine months under tight security and only shared the news after her daughter, Stormi, was born earlier this year. And even now, information about how she's feeling about parenthood is still coming from unnamed sources that speak to media outlets.

Khloé on the other hand seems happy to share her about her life, whether it's on talk shows or Instagram or Twitter. Here are some of Khloé's best pregnancy quotes.

Just after her little sister broke the news about Stormi's birth, Khloé put out a call for some sex talk on her app, where fans could ask her questions about her sex life, or romance in general. One fan asked her about pregnancy sex and Koko got real. According to E! News, she said:

The Good American designer added that her boyfriend, Cleveland Cavaliers player Tristan Thompson was a good sport about it. As E! News reported, she clarified:

Tristan is amazing and would never make me feel different in any way. But I'm sure it's uncomfortable for a man to have sex with a pregnant woman too. Personally, I get uncomfortable and insecure. Also, you can't move the same, so you kind of feel useless, LOL. But you just have to improvise and do the best you can.

On How Scary It Can Be

Khloé opened up on Keeping Up With The Kardashians about taking progesterone supplements so that she could conceive and carry. During the episode she spoke to her sister Kourtney about how that made her want to keep things (as she did for as long as possible) on the down-low. According to Hello Giggles, she said:

This is why you don’t announce early. There’s a lot of complications, a lot of things could happen, and I could have had the potential to miscarry. As soon as I get to my second trimester I will have such relief, and that’s all I’m waiting for.

And Kind Of Lonely

While appearing on the Ellen DeGeneres Show, Khloé continued to explain why she didn't want share her news till she felt it was safe. Which is something so many newly pregnant do, just in case something goes wrong. She said:

At the beginning, the first trimester is the worst and no one knows you’re pregnant yet and you feel the most uncomfortable. I think once people know you’re pregnant, you get all the excuses.

The Well-Intentioned Advice Is...Well, You Know

On Jimmy Kimmel Live!, Khloé dished about how all of her siblings wanted to give her advice. And it wasn't always her thing. She spilled that Kourtney might be "the worst" advice giver, if only because she's such a crunchy mom:

A lot of it is unwanted. I don’t know if it’s the worst, but Kourtney gives a lot of advice. I think it’s so sweet but I don’t want to do some of that stuff. You can never have a plastic toy, ever! If someone buys blocks, I’m allowed to have blocks! Let me experience things. It’s either her way or no way. It’s not what you say, it’s how you say it.

She Hasn't Held Back On The Snacks

Khloé's tweeted through a lot of her pregnancy cravings, which is sort of a big deal, as she's always struggled with her body image and how the public perceives her. One of my faves? "Today for lunch I had a salad and THREE bowls of cereal. I had no control in the kitchen," she tweeted, much to her fans' delight. I mean, why not?

Or Openly Missing Her Body

She's always been really open about admitting that she misses having control over her body, too, which is something some women don't talk about enough. She tweeted, "Now I am googling images of my pre-pregnancy body and I'm feigning to get back to my workouts and old body. Holy cow." And when a fan tried to cheer her up, she came back with saying that she felt like a "blimp." Which, you know, happens sometimes when you're carrying a growing fetus.

Khloé Was *Shook* When She Learned It Wasn't A Boy

Upon learning that she was having a baby girl and not a boy, Khloé was a little confused. She said on Keeping Up With The Kardashians:

When you have your mind made up as to what you’re having… everyone told me you’re going to feel what you’re having and you’ll just kind of know. And then when you find out it’s the complete opposite, it’s just a shock.

On Just Being So Happy

On Instagram, Khloé shared a picture of herself on a trip to Japan with her sisters. There, fans congratulated on her on how well she looked and, according to People, Khloé responded:

I am so thankful that after my first trimester… my pregnancy has been so healthy and strong! God is great! Much luck to you and your family.

In her pregnancy announcement, Khloé said of being pregnant:

I am so thankful, excited, nervous, eager, overjoyed and scared all in one! But it's the best bundle of feelings I've ever felt in my life!

Overall, Khloé has had a healthy and happy time being pregnant. She's likely going to love being a mom.