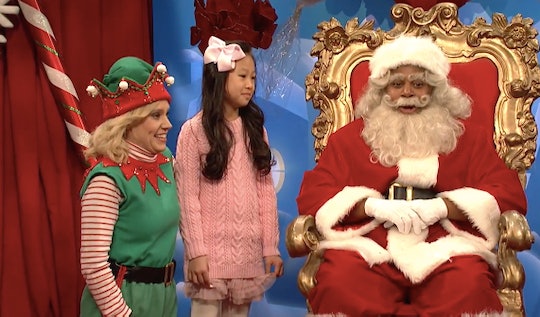 Kids On 'SNL' Hit Santa With Some Tough, But Really Important Questions

Sometimes the only way to get through tough times is to laugh, which is why Saturday Night Live is so important. In this week's cold open, kids on SNL asked Santa some really tough questions about sexual assault allegations, coal, and even the NFL protests. The sketch starred Kenan Thompson as a mall Santa and Kate McKinnon as a well-informed elf.

During the sketch, each kid approaches Santa with their Christmas wishes and a few questions about the current political climate. One kid asks what Al Franken did, which he feels awkward answering, since Franken was accused by eight women of groping, forcing kisses, and even allegedly took a picture of himself "grabbing" a woman's chest while she was sleeping, as Vice reported. No one likes to talk about around innocent little kids, right? Turns out these kids aren't all that naive, though.

Another asks about Alabama Senate candidate Roy Moore, who Santa says is on the "naughty list." McKinnon ad libs, "actually, it's more like a registry," acknowledging that the allegation made against the Republican politician would make him a sex offender. When a kid asks about the president, Santa remains impartial.

"Well, Santa likes to stay out of political matters. Our president may have said or done a few naughty things," he says. McKinnon, always on point, adds, "19 accusers. Google it," which refers to the number of women who have accused President Donald Trump of sexual misconduct, though he's denied all of the allegations.

When Santa tells one of the kids that he's going to bring him a "toy," the little guy asks if it's going to be like "the one Matt Lauer gave" to his co-worker, referring to the allegations against the former TV anchor.

But it wasn't all about sexual assault. Some kids were worried about the tax bill, because their parents can't afford presents. McKinnon doesn't mince words when she informs everyone that the tax bill means Social Security and health care cuts. When Santa talks about coal, one of the kids reminds him that it's a "dying industry." Others lament that a new Xbox just means more jobs for kids in Chinese factories. Seriously, where do they get this stuff?

Increasingly flustered by the kids' questions Santa asks for a cigarette break and notes that he never thought it, but that the public schools must actually being doing a good job educating kids these days. Or, they just read a lot of Twitter, which is where most of their partisan cracks seemed to come from.

People Thought The Sketch Was "Fierce"

The sketch was a pretty scathing condemnation of political climate, especially of the GOP. One little girl said that the one main lessons she learned this year was that if you do something naughty and admit it like Franken, you have to resign and face consequences, but if you deny it, like Moore, you get to stick around.

McKinnon eventually tries to cheer the last girl up by reminding her that one day, the GOP and Trump will be gone, and good people in America will make things better again. "I know that things seem particularly insane right now — like truly, mind-bendingly insane. And we seem to have lost all perspective on what’s naughty or nice," she adds.

That's pretty optimistic, but in these terrible times, it's all anyone can hope for. McKinnon has been a fan favorite on SNL since she played Democratic presidential nominee Hillary Clinton last year. And she loves her political sketches. She told Vanity Fair in her cover story interview:

I love doing impressions of politicians because the task is always to imagine the private lives of these people whose job it is to project an image of staunch, unflinching leadership and grace, and that's just not how human beings, in their heart of hearts, work.

The same goes for all of her characters.

Although it's sad and twisted that kids in real life are likely asking parents everywhere the same questions, at least McKinnon and the SNL cast can find some humor in it. It might be the only thing that gets us through the next three years.