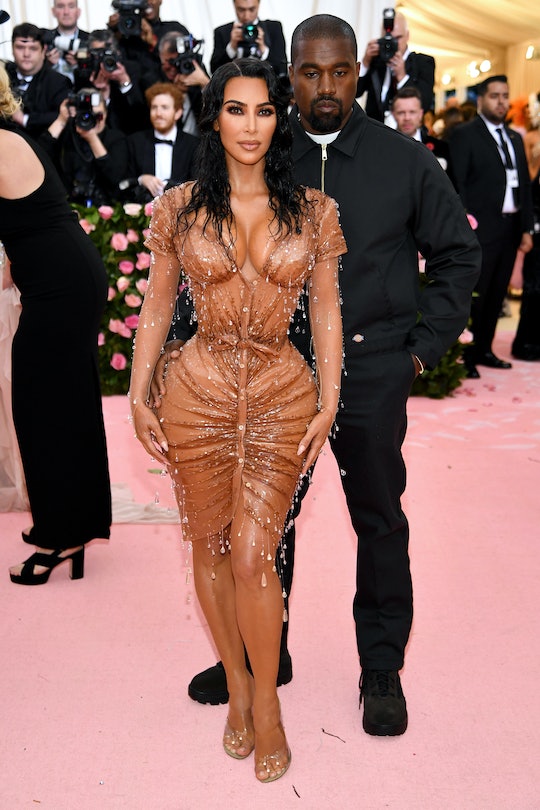 Stop everything, and fire up the Kimojis. On June 10, Kim Kardashian shared a brand new photo of Psalm West to her Instagram, giving fans of the Kardashian-West fam their first up-close look at their newest addition's tiny, adorable face. In the photo, Kimye's new baby boy is seen snoozing peacefully with his arms behind his head, looking as relaxed as you would if you were born to two of the most successful stars in the game. The photo has already gotten over 1 million likes in under an hour of its posting, and fans simply can't get enough.

This is the first *real* glimpse of Psalm that Kardashian has given the world, as the only other picture of him they've posted was taken from a distance, so his face wasn't really visible. (Plus, the picture raised concerns about the infant's sleep safety, so people may have been more focused on that than trying to zoom in on his face.) The couple has been pretty tight lipped over all about their youngest child since his birth a month ago, not even confirming the reasoning behind his name yet, though Grandma Kris Jenner did give some hints.

But the new picture shows off baby Psalm in all his glory, satisfying fans who have been waiting ever-so-impatiently for a good view of the newest addition to the West family.

*Squeals.* Look at him! Those pouty baby lips and perfectly rounded cheeks are enough to melt your heart. And even though they're closed, you can tell Psalm has big eyes, just like his siblings. Speaking of which, the youngest West looks a lot like his older sister Chicago, which Kardashian indicated in her birth announcement last month. "He’s also Chicago’s twin lol I’m sure he will change a lot but now he looks just like her," she wrote on May 10, 2019.

And it seems fans agree, based on their tweets anyway.

You can decide for yourself on how much you think Psalm looks like his big sister by looking back at her baby pics. Either way, he's precious.

The picture is also raising speculation on Psalm's middle name, as Kim K captioned her post "Psalm Ye." Kanye decided to start going by "YE" in September 2018, which he announced via Twitter, according to the BBC. So Kardashian's caption is leading fans to believe Psalm's middle name is Ye, making it rhyme with Kanye. Some are even wondering if his last name is Ye, though that seems unlikely since his siblings all have the last name West.

Pretty clever if that's actually the reasoning behind is name. But neither half of Kimye have confirmed his name is supposed to rhyme with Kanye, but if I've learned anything in my Kardashian-loving days, it's that they're always five steps ahead of the rest of the world.

Bottom line, all four of Kimye's kids are adorable, and the world will continue to lose its collective mind any time they decide to grace the world with a photo of them. Here's to hoping Psalm makes his Keeping Up With The Kardashians debut soon.