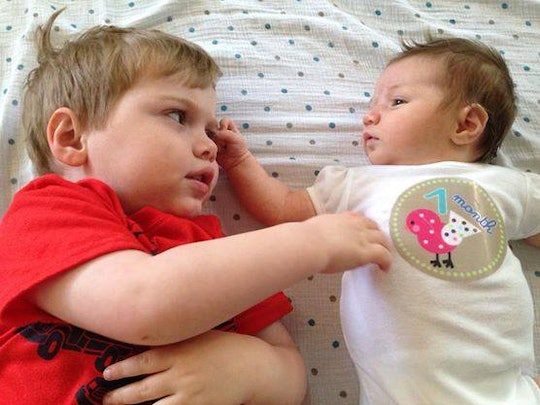 Childbirth With Your First Kid Vs. Your Second

I'm a big ol' hippie, but I tend not to be a terribly sentimental one. Still, when I think about the births of my two children (which were very different) I fondly and truly believe they both entered the world exactly the way they were "supposed to." Every birth story is unique, but I've also found in talking to other women that there are some relatively common differences between labor and delivery with your first kid and second.

Above and beyond my first and second labor and deliveries being different just based on the fact that my first delivery was a c-section and my second delivery was a VBAC. So, in some ways, while my first and second labors were differentiated, my first and second deliveries both felt like firsts. Emotionally or otherwise, though, I never had the exact same feelings during my second delivery. In the end, nothing prepares you for birth like birth, largely because nothing really can. (Short of, like, swallowing a live, medium-sized puppy and pooping it out after nine months or something, which I really, really urge you never to attempt.) So laboring and giving birth a second time allows you invaluable insight and retrospection that makes for a familiar but new experience.

A bit of a disclaimer: I feel like it's fashionable (or at the very least common) for "veteran moms" to say things that seem to look down on first-timers. That's not at all my intention or feeling. For one, it doesn't make sense, since we were all first-time moms at some point. Secondly, it's not really fair to expect people who have not given birth before to approach it the same way as someone who has. Thirdly, and I feel like this should be the motto for everyone and everything on the face of the planet: everyone is different. What worked for you won't work for everyone. That said, looking back on my own experiences between my two labor and deliveries, I can glean some insight (and, in some cases, self-deprecating humor) that I know some other moms can feel me on.