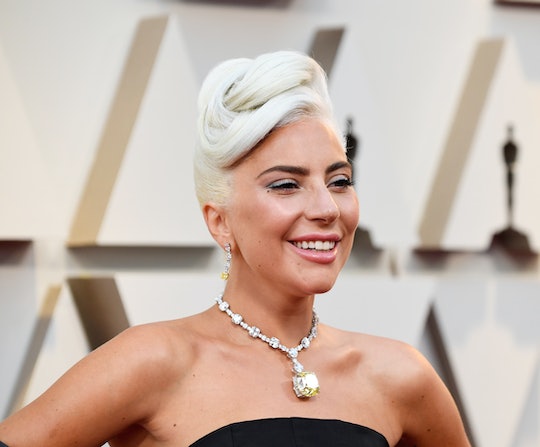 The 91st Academy Awards' red carpet had no shortage of glitz and glam, with the famous and fabulous sashaying in pink and highly detailed dresses. All the stars were dressed to the nines for the occasion, but the abundance of glam didn't stop everyone's eyes from going straight to Lady Gaga's red carpet gown when she arrived at the 2019 Oscars in a stunning and simple black gown that was all but impossible to ignore. It's safe to say Joan Rivers would be proud.

On Sunday night, the A Star Is Born actress wore a custom Alexander McQueen black dropped-waist gown with matching black gloves and "the" Tiffany diamond, last worn in public by Audrey Hepburn, according to W Magazine. Yup, you read that right. Some even said Gaga was channeling Hepburn with her look.

The double nominee was glowing despite announcing the ending of her engagement to Christian Carino less than a week ago, not letting heartbreak stop her from enjoying the biggest night of her acting career to date. Just look her at her! That's how you do a red carpet, my friend.

The simple dress calls attention to the gorgeous diamond on Gaga's neck, which some Twitter users pointed out bore a resemblance to the famed "Isadora" diamond Kate Hudson wore in How To Lose A Guy In 10 Days. To be clear, the diamond wasn't actually the same one Hudson wore, but the resemblance is definitely there, giving the queen even more clout.

Although she's no stranger to awards shows — Gaga has two Golden Globes and nine Grammys to her name, according to Harper's Bazaar, and she gave a stunning performance at the 2016 Academy Awards for her nomination for her song "Til It Happens To You" — the 2019 Oscars were a special night for the A Star Is Born actress, as it was her first time attending the most prestigious film awards ceremony as a Best Actress nominee. The Academy nominated Lady Gaga for her performance as Ally in Bradley Cooper's directorial debut, which garnered eight Oscar nominations in total (though Cooper was not nominated for Best Director, which many are calling a snub).

The Academy also nominated Gaga for Best Achievement in Music Written for Motion Pictures (Original Song) for the song "Shallow" per IMDB, which already won a Golden Globe, two Grammys, and a People's Choice award. The star was nominated for Best Actress at the Golden Globes too, but she lost out to Glenn Close, whom she tied with for Best Actress at the Critic's Choice Awards in January. The tie leveled the playing field between the two Oscar hopefuls, making it even harder to predict who will take home the most coveted acting award in Hollywood.

Although Gaga's look for the evening was definitely a showstopper, it was much tamer than fashion choices of her past — never forget the meat dress of 2010.Vogue theorizes Gaga's deviation from fashion tendencies of her past is a calculated choice, as the more classic looks ensure the focus is on the star's acting chops rather than her attire. Indeed, Lady Gaga has shown up at all of the 2019 awards in simpler looks, from a silver sheath dress at the Grammys to an understated blue ballgown at the Golden Globes. Twitter was feeling the classic black, too.

But here's the bottom line: whether she's wearing a dress made of literal meat or a ballgown fit for a queen, Lady Gaga is as gorgeous as she is talented, which is really saying something.