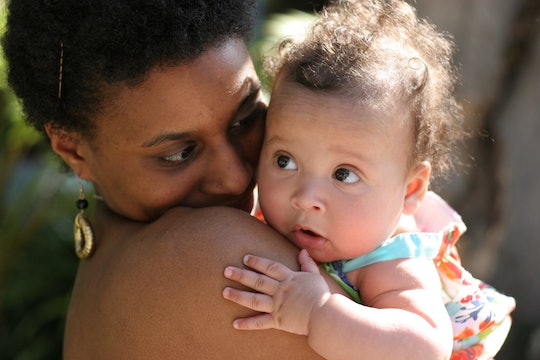 After being a mom for seven and half years, I've learned that mistakes come with the territory. If I was to count the amount of things I do wrong on a daily basis, I'd need a few sets of hands. I've accepted this as part of parenthood, and I try not to beat myself up about it. Whenever a friend is newly pregnant with their first child, my first word of advice — of course, only when they ask — is that they should accept that they're going to f*ck up over and over and over, but as long as their kid child is still happy and cared for, they're good. I think that knowing and accepting the fact that you won't be the perfect mom is the most important thing to know as a first-time parent. It's the advice I wish someone had given me, because my biggest parenting mistake changed the way I saw myself as a mom forever.

My ex-husband and I weren't planning on having children anytime soon when we first got pregnant with our eldest daughter. Becoming a mom was so far off my radar at that point that the world of parenthood didn't exist for me. I don't think I could even wrap my mind around what it would mean to be a parent at 20 years old, but then I was pregnant. I was pretty confused at first and I took advice from the only moms I knew: older women who had kids but were far removed from babyhood. The Internet became my saving grace. I'd sit on message boards for hours reading what everyone was saying about breastfeeding, learning about what kind of cribs I should get, and discovering what I should be teaching my children at different stages. I bought so many books on pregnancy and babies but I only ever made it through the first one. I was under the assumption that in order to be the perfect parent, you just had to try to do your best. So I would.

We swore we wouldn't share a bed, that we'd feed our baby all organic, and that we'd keep TV entirely off the menu. And my ex and I agreed that we'd avoid spankings and shouting entirely, because they were things we'd both grown up experiencing and we didn't want those same memories for our kids.

Even when I was pregnant, I never really felt the need to subscribe to any one kind of parenting style. Doing so just felt like too much pressure. I thought I would just be a chill, calm mom. The kind who didn't get riled up at the little things. I looked up what it meant to be an attachment parent, a "granola" parent, a gentle parent, and an elephant parent. That last one sounded pretty awesome (but not as awesome as being a sloth parent). I tried to do an array of things by "taking" a little something from every style that appealed to me, because that's what you do when you're an easy-going, play-it-cool parent. So we swore we wouldn't share a bed, that we'd feed our baby all organic, and that we'd keep TV entirely off the menu. And my ex and I agreed that we'd avoid spankings and shouting entirely, because they were things we'd both grown up experiencing and we didn't want those same memories for our kids.

I knew immediately after that I'd done the wrong thing, and I was so horrified by what I'd said. She was only 4 months old.

But when Riley was 4 months old, she began teething, which was really soon for a baby. She'd cry out between midnight and 2 a.m. every night and we'd both try our best to soothe her, but nothing worked. We tried to let her cry it out, but listening to that crying only drove me insane. I know that hearing their child cry in the middle of the night has a different affect on every parent, but hearing her just enraged me. I felt guilty about having such rage towards a tiny baby — a tiny baby who couldn't communicate what she wanted, but I couldn't help it. On one night in particular I tried rubbing her back so she would fall back asleep, but my patience was waning and I just wanted to get back in bed. Riley just wouldn't stop screeching. So I took a step back from the crib and screamed:

I knew immediately after that I'd done the wrong thing, and I was so horrified by what I'd said. She was only 4 months old. I put her down and ran back into the other room, telling my husband that he needed to deal with it tonight, convinced our daughter would hate me forever. I didn't even have the heart to say her name or what I'd just done, but I knew he'd already heard everything. He told me it'd be OK and that I should go back to sleep, but would it?

While everyone else was celebrating being the perfect parent, here I was: a woman so bad at being a mom that I had screamed and cursed at a 4-month-old baby.

I woke up the next morning and smothered Riley in hugs and kisses, as if I could take back what I had done by overwhelming her with extra love. I went online to a parenting message board with every intention to share what I'd done and how I behaved, but I was too embarrassed by what had taken place so I changed my mind. I carried it with me for a long time before I ever told someone, crying because this mistake only proved that I was a terrible mother for shouting at my tiny baby. But a friend told me, "Oh, I totally get that. I've done it, and still do it from time to time." Knowing I wasn't alone comforted me, but I was still horrified.

So I made a promise, right then and there, that I'd never shout at my child again. I didn't want to be That Mom, and I worried that if my behavior continued, it'd really damage Riley. My husband tried to tell me that yelling or shouting wasn't a big deal and didn't define who I was as Riley's mom, but from what I saw from every other mom around me, and from what I'd read on every parenting website, I was a total failure. While everyone else was celebrating being the perfect parent, here I was: a woman so bad at being a mom that I had screamed and cursed at a 4-month-old baby.

So much of my desire to be a "perfect" parent went out the window after Riley arrived. Yes, there was the yelling, but it went beyond that.

Then it happened again. When Riley wouldn't go to sleep in the middle of the night, I shouted again. Only this time, I didn't run out of the room terrified by what I'd done. I didn't berate myself for the mistake. I didn't punish myself for being human, for being tired, and for losing my cool. I screamed, and yeah, I had promised myself that I wouldn't do it again, but I'd done it. There was no choice but to own up to it, and to take a long hard look at myself.

In the fresh light of day I didn't smother Riley with kisses to make up for my harsh words. I realized that I wasn't ever going to be the perfect parent that I'd promised myself I would. Instead, I made a different promise. I promised that no matter what — the good, the bad, the ugly of parenting — I was going to be real with myself about my shortcomings and forgive myself for the moments where I lost it. And in the morning, Riley wasn't terrified by the sight of me. She was excited to see me. No matter what had taken place the night before, Riley was more thrilled than ever when I went to pick her up in the morning.

So much of my desire to be a "perfect" parent went out the window after Riley arrived. Yes, there was the yelling, but it went beyond that. We swore we wouldn't share a bed with her — not until she was 1 — and she just stopped sleeping with us about a few months ago. I swore she'd only eat organic baby food, but that went out the window when I learned that buying organic is more expensive than I thought it would be. There was once the "no" TV rule, which worked until she was about 6 months old and I was pregnant again with a crippling morning sickness that kept me on the couch.

Seven years later, and my days are now filled with a lot more yelling than I'd ever pictured. A year after Riley was born, her brother Beck only added to the overwhelming love and chaos of our home. At 6 and 7, I yell and scream and shout when I lose my cool or when they don't listen, but I am quicker than ever to forgiveness — for all of us. Of course now they roll their eyes and remind me that yelling isn't "helpful" for them, but their willingness to accept me as I am — imperfections and all — has taught me that I am a good mom, regardless of the fact that I'll never be perfect.