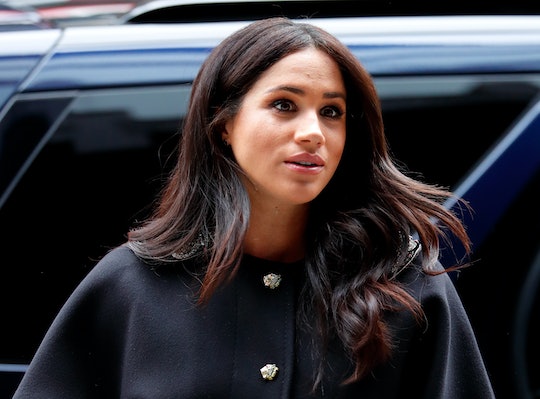 As details of a recent court case emerge, documents suggest that Meghan Markle felt "unprotected" during her pregnancy by the royal family. Particularly when it came to her frequent vilification by the British tabloids.

In October 2019, Markle launched a lawsuit against Associated Newspapers Limited, the publishers behind The Mail on Sunday, Daily Mail, and the MailOnline. The lawsuit was directed at the newspaper for printing excerpts of a private letter she had written to her father Thomas Markle in 2018, The Sun reported. The Duchess of Sussex is suing the publisher for breach of privacy and copyright infringement.

Various news outlets, including the BBC, recently obtained court documents filed by Markle's legal team outlining exactly how the tabloids caused her emotional distress. "The Claimant had become the subject of a large number of false and damaging articles by the UK tabloid media, specifically by the Defendant, which caused tremendous emotional distress and damage to her mental health," the court documents state.

At the time, Markle and her husband Prince Harry were expecting their first child, now 1-year-old son Archie. The court documents also point to how difficult it was for Markle to be unable to defend herself in the media due to the traditional "no comment" approach adopted by Kensington Palace. "The stance of 'no comment' was taken by the KP Communications Team without any discussion with or approval by the Claimant, as is standard practice for Royal communications," the documents read.

After The Mail On Sunday published excerpts of a personal letter Markle had written to her father, which he shared with the media outlet without her permission, five of her close friends stepped forward anonymously to defend her in an article for People magazine. The court documents, which refer to the friends as A-E, noted that "her friends had never seen her in this state before, they were rightly concerned for her welfare, specifically as she was pregnant, unprotected by the Institution, and prohibited from defending herself."

The court documents also claim that Markle was unaware of her friends' decision to defend her and would have "asked the KP Communications Team to say on the record that she had not been involved," but was unable to do so.

Markle herself has alluded to her struggles in the past, particularly in the ITV documentary Harry & Meghan: An African Journey, which was released just weeks after the lawsuit was announced. At the time, she told journalist Tom Bradby that when she met Prince Harry her British friends warned her, "I'm sure he's great, but you shouldn't do it. The British tabloids will destroy your life."

Since the lawsuit was initially put forth in October, Markle and Prince Harry have changed their lives drastically. In January they stepped back from their senior royal roles and are now living in Markle's hometown of Los Angeles, where they have been quietly delivering meals to people in need and volunteering with local charities.

Since leaving the royal family, Markle has been slowly recovering her own voice. Most notably when she passionately spoke of her support of the Black Lives Matter movement. After so many months of not being able to speak her mind, Markle spoke to the graduating class of her own alma mater, Immaculate Heart High School. As she told the students about to head out into the world, "The only wrong thing to say is to say nothing."