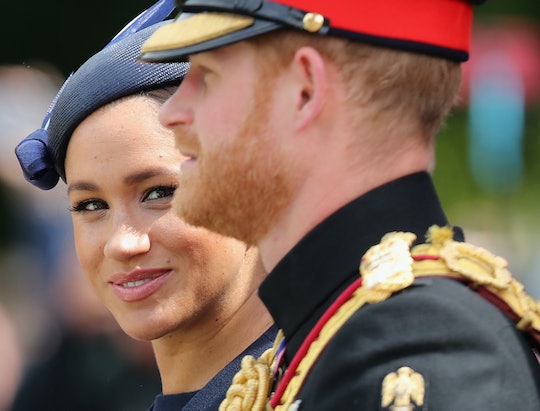 Meghan Markle made her first public appearance following Archie's birth, stepping out for the Trooping the Colour on Saturday. The Duchess of Sussex appeared at the event with Prince Harry by her side, but their 1-month-old baby boy was understandably nowhere to be seen. Still, some eagle-eyed royal fans have determined that Meghan Markle may have given Archie a sweet nod at the event with a delicate ring many may have missed when looking at photos of her from the big day. The piece of jewelry was only visible when the former Suits actress waved to fans waiting nearby to catch a glimpse of her and the Duke of Sussex.

On June 8, Markle was photographed sporting a pave diamond eternity band around her finger, according to news.au.com. The ring appeared alongside her engagement ring, designed by Cleave and Company, and her wedding band. Brides suggested that given the fact that Markle was seen sporting the ring for the first time after Archie's May 6 birth, it would stand to reason that could be a push present from Prince Harry. It may have also been a gift to mark their one-year marriage anniversary on May 19.

Eternity bands are popular with members of the royal family, according to People, and Kate Middleton received a similar piece as a gift after her eldest son, Prince George, was born.

The Trooping the Colour parade wasn't just Markle's big post-baby debut; it also marked nephew Prince Louis' first big appearance where he appeared on the balcony of Buckingham Palace with Middleton and Prince William. The 1-year-old was even spotted sporting the same outfit his uncle, Prince Harry, wore more than 30 years prior, according to a tweet containing both photos.

The duke sported the adorable ensemble to the Trooping the Colour parade in 1986, where aunt Princess Anne hoisted him in her arms for the public to see, according to Entertainment Tonight. What's more, Middleton was photographed wearing a yellow ensemble just like Princess Anne wore in photos with Harry.

Markle and Middleton were photographed together during the Trooping the Colour parade, but the former Suits star and her hubby didn't snag any photos with Prince Louis in his recycled outfit. The royal family Twitter account shared photos of Markle, Prince Harry, Duchess Camilla and Middleton arriving together at the parade in a horse-drawn carriage. The appearance came amid rumors Middleton and Markle are caught in the midst of a feud. Neither has made any effort to address the rumors, brushing them off and continuing to appear together at various events. There were no signs of trouble between the two royal women as they smiled and waved at the crowd on Saturday. They even sported similar hair styles to the outing.

The royal family has mastered subtlety, but Markle's sweet nod to Archie might be one of the best examples. Baby Sussex may be too young for outings right now, but with her new eternity band it's like he's always with his mom and dad — no matter where in the world they are at any given time. Still, fans are looking forward to a day when he can actually join his parents.