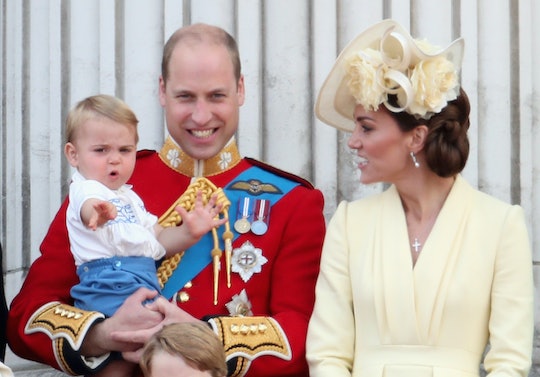 There are few things I love more than a thrifty set of royal parents. The Duke and Duchess of Cambridge have become well known not just for their trio of adorable children but also because they know how to recycle truly fabulous outfits. And when Prince Louis made his unbelievably charming debut on the balcony at Buckingham Palace for the annual Trooping The Colour, he wore one that made me extra happy. Because Prince Louis wore Prince Harry's hand-me-downs, and this was not only super cute but also confirmation that the family love is alive and well between the Cambridge and Sussex couples so we can all start being positive, okay?

The whole royal family came out on a sunny Saturday in June to celebrate Queen Elizabeth's 93rd birthday for the annual military parade in her honor, Trooping The Colour. This year's spectacle was especially exciting for royal watchers for several reasons. Meghan Markle, Prince Harry's wife, was all smiles in her first appearance after welcoming the couple's first child on May 6, Master Archie Harrison Mountbatten-Windsor. And of course 1-year-old Prince Louis, the youngest child of Kate Middleton and Prince William, was on hand to wave enthusiastically at the crowds of well-wishers outside the palace with his family.

The entire family, including 5-year-old Prince George and 4-year-old Princess Charlotte, looked adorable in coordinated pastel outfits. But it was Prince Louis' blue shorts and white shirt that drew a whole lot of interest. In fact, as People noted, it looked incredibly familiar. Perhaps because Prince Louis' uncle, Prince Harry, wore the same outfit more than 30 years ago. To the very same event, in 1986, no less, where he was hoisted up in the arms of his aunt, Princess Anne.

This isn't the first time the Cambridge family has recycled clothing, although it is the first time they've dressed one of their children in hand-me-downs from his uncle, and that's especially exciting since he's a new father himself. Prince George has worn hand-me-downs from his father Prince William from 1984 to the Trooping The Colour in the past in both 2015 and 2016, according to the Telegraph.

As the third child, I think Prince Louis should go ahead and expect that he is going to be getting all the hand-me-downs. Just two weeks ago he wore his brother Prince George's shorts recently to the Chelsea Flower Show when their mother created a garden for the event, as E! News reported.

I don't know about you, but I really need to find out what sort of laundry detergent the royal family uses because their whites never looked whiter.

It's actually quite lovely that Prince Louis is wearing something from his uncle Prince Harry. After all the media attention that has been so focused on the relationship between the two families, this sort of subtle nod points to an enduring connection between the brothers that is bigger than any gossip.

Now all we need to see is baby Archie wearing hand-me-downs from Prince Louis and we will have come full circle. I can't wait.