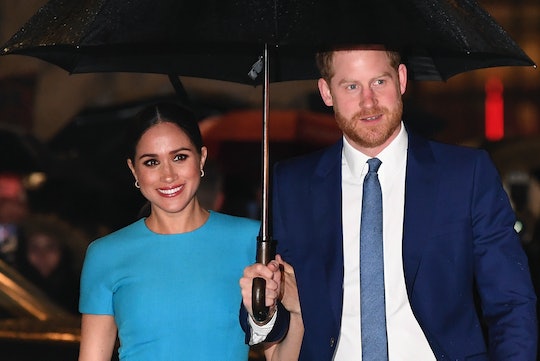 Mark Your Calendars: Meghan & Harry Are Making A TV Appearance Next Week

After months of keeping seriously low profiles, Meghan Markle and Prince Harry are appearing on TV for an upcoming special. But it looks like they're keeping things kind of casual with this appearance as they weren't introduced with their royal titles in a promo for the broadcast.

On Tuesday, Sept. 22, the Duke and Duchess of Sussex will be joining several notable celebrities as part of the celebration of the TIME 100 most influential people on ABC. In a promotional video shared with E! News, a narrator says "Harry and Meghan" will join celebrities like John Legend, Jennifer Hudson, Trevor Noah, and Sandra Oh in the TV event. A press release from TIME, however, does mention the couple as "the Duke and Duchess of Sussex Prince Harry and Meghan Markle," so it's unclear how they'll be introduced on Tuesday.

Either way, due to the ongoing pandemic, the usual in-person events that accompany the annual TIME 100 edition could not happen, so instead fans will get a totally different experience. This year's televised peek into the lives of the recipients reflects the unusual times we are living in, as TIME studios president Ian Orefice said in a statement to The Independent.

"In a year in which we are unfortunately unable to convene the TIME 100 community together in person, we are excited to celebrate the extraordinary achievements of the members of this year's list with a brand-new experience on ABC that will allow more people to participate than ever before," Orefice told The Independent.

The last time fans saw Markle on screen was at the end of August, when she sat down for a chat with feminist icon Gloria Steinem to discuss the importance of voting in the 2020 election. While both Markle and Prince Harry have appeared on Zoom to connect with their various charitable organizations (and apparently had to deal with some adorable interruptions from baby Archie), chances are they will be on screen a bit more frequently in the future. Or at the very least, producing some programming for the screen since the couple recently signed a production deal with Netflix.

As fans wait for Sept. 22 to arrive with the TIME 100 special on ABC (with the print edition released on Friday, Sept. 25), we can all have fun speculating what an inside look at Meghan Markle and Prince Harry's life looks like now. A home tour, a backyard yoga class lead by Markle herself... really anything would be just marvelous.