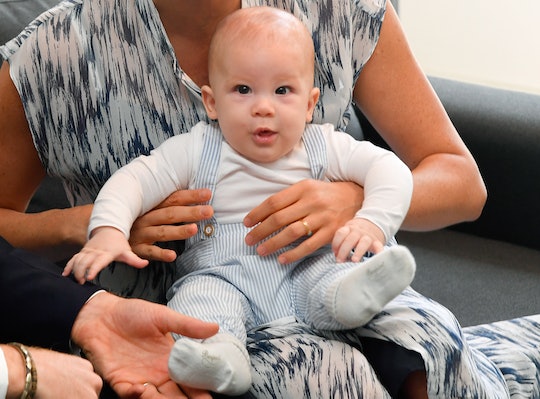 As it turns out, a pretty adorable side effect to doing business with the Duchess of Sussex is that Prince Harry and Meghan Markle's son Archie apparently interrupts her work meetings from time to time. That's right, you could be having a very professional conversation with Markle and then all of the sudden little Archie pops into view, as babies do. It would be sort of like catching sight of a Yeti, now that photos of the Sussex baby are so rare these days.

Omid Scobie, royal reporter and author of the book Finding Freedom: Harry And Meghan And The Making Of A Modern Royal Family, recently sat down for his podcast The Heir Pod to discuss the Sussex family. In his conversation with host and ABC correspondent Maggie Rulli, the two royal experts chatted about the ever-exciting lives of Markle and Prince Harry, who he noted have "hit the ground running" ever since settling into their new home in Montecito, California. In recent weeks Markle and Harry have been busier than normal, particularly since signing a production deal with Netflix to create new programs over several years.

All of these new developments are exciting for the couple, and apparently their little boy has gotten in on the action as well. At least, 16-month-old Archie has apparently become a fan of getting involved in his parents' Zoom meetings.

As Scobie explained on the podcast, during his research for the book he came across a lovely detail about the Sussexes' home life. "I loved discovering their daily Zoom calls with the various initiatives and people that they work with," Scobie said. "And how Archie is no stranger to climbing in front of the web camera and making little impromptu cameos."

Markle and Prince Harry are reportedly raising little Archie with a nanny on hand during the day but doing the night duties themselves, as Scobie wrote in his book Finding Freedom, as People reported, but it makes sense that he would still be interrupting his parents' meetings. Prince Harry said in a Zoom meeting with the Rugby Football League in the United Kingdom in August that Archie is "our number one priority, but our work after that is the second priority. And we’re just trying to do everything we can to do our part to make the world a better place."

Considering the efforts the couple have made to ensure their son has a happy life, it makes sense that they wouldn't let a little thing like an interrupted work call bother them. He is their priority, after all.