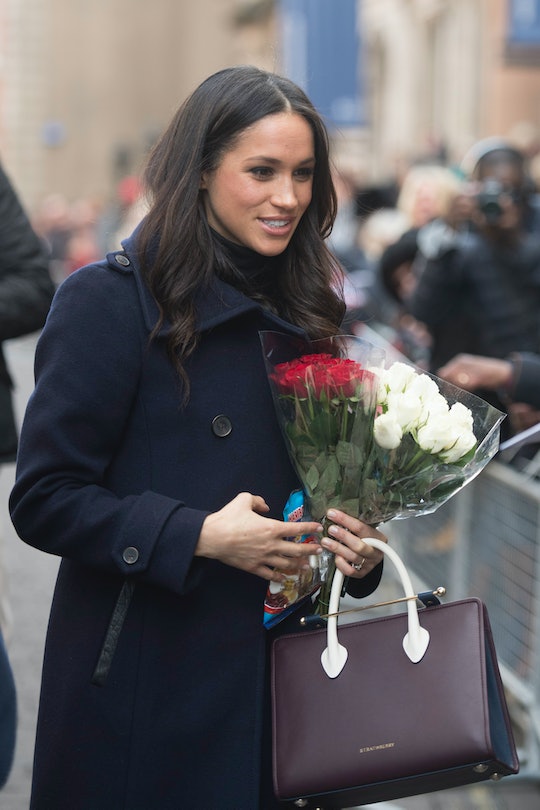 Who doesn't want to live like a royal, right? Especially if that means emulating the Duchess of Sussex, Meghan Markle. Thankfully, it doesn't require a pretty penny or an extravagant wedding to at least look and dress like Markle. In fact, Megan Markle's must-have handbag is available at Nordstrom, which means you can carry the same bag as a duchess.

Strathberry, an Edinburgh-based luxury handbag company, was established in 2013 by husband-and-wife duo, Guy and Leeanne Hundleby, according to Harper's Bazaar. The couple's goal? To craft Scottish accessories that were capable of reaching a global audience. The duo soon built a solid reputation of delivering mid-range priced, trendy leather items that didn't break the bank but looked elite.

The Duchess has been photographed carrying the brand as far back as December 2017, during her first public royal appearance with her now-husband, the Duke of Sussex, Prince Harry. As a result, that specific handbag — a burgundy, navy, and cream colorblocked tote, according to People —sold out in just 11 seconds.

December wasn't the last time Meghan's been out-and-about with a signature Strathberry, either. In February — just a couple months after her first official outing — she set herself apart as a a future member of the royal family at her engagement party in Edingburgh with one of the brand's popular cross-body bags (‘Bottle Green East/West Mini’) that matched perfectly with her green and navy plaid coat.

That's not all, of course. When Meghan Markle supports a brand, she goes full-out. In July, she donned a tan leather Strathberry during a trip to Ireland. Who knows which bag we'll see her with next, but chances are it could very well be the one you end up nabbing at Nordstrom.

There's a reason Markle has picked these bags, consistently, to use and showcase. According to Nordstrom, the "structured silhouette with flat base and protective metal feet" aid with "stability," so these bags aren't flimsy. There's an interior wall pocket to hold your favorite royal lipsticks or photos of Prince Harry and Meghan (in a totally non-creepy way, of course), a "rolled top handle with an optional chain strap to wear across the body for complete versatility, and the Strathberry signature slip-over bar closure.

So, sure, you might not be a royal, but thanks to Nordstrom's small launch of carefully selected Strathberry handbags, you can look like one. Right now they're only available via pre-order, so time is of the essence, to be sure. There are currently nine styles to choose from, including a solid red Midi Leather Tote and a Mini East/West Tricolor Leather Crossbody Bag. Prices range from $420 to $810, so these handbags are not what any reasonable human would consider "cheap," but can you really put a price on looking like a royal?

So go ahead, treat yourself and purchase a handbag fit for royalty. After all, choosing a Strathberry as your go-to hand bag might just put you six degrees closer to the royal family. Or, at the very least, closer to Meghan Markle's sleek style and impeccable fashion sense.

More Like This
A Peek At The New Hilary Duff x Carter’s Collection
Gabrielle Union Shares Sweet Video Of Kaavia In A Spot-On Little Mermaid Costume
Zaya Wade Is Rocking New Long Hair & As Gabrielle Union Put It, She's A "Vision"
Meghan Markle Wore A Treasured Pair Of Earrings To Honor The Queen At Her Funeral