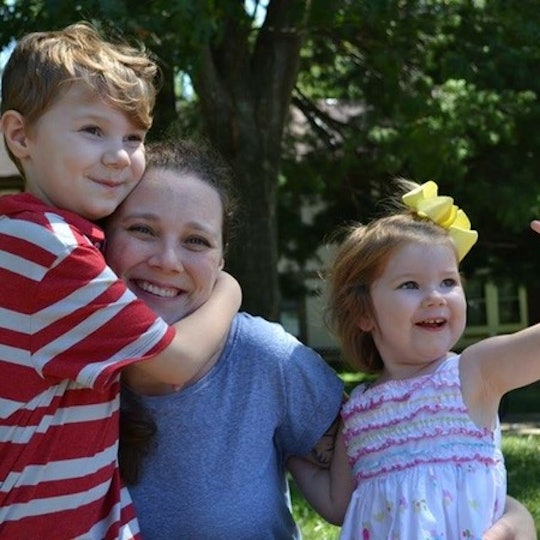 My son and my daughter have never had to sleep alone if they didn't want to. In fact, for their first two to three years, I never would have even suggested they try. As with almost every aspect of parenting, I never really had a plan in place. I just went with what was easiest and working in the moment and took it from there. Now that means that my kids share a room and the queen-sized bed that takes up much of that room. And right now, that arrangement has been amazing for our family.

Despite a three-year age gap, my son and my daughter are really close. They tandem breastfed when they were little and for a while, my partner and I shared a bed with a side-carred crib with both of them. I think all the snuggles in their early years must have had an impact, because the two of them still sleep great, curled up with each other or with a parent. My 6-year-old son only started lasting in his room all night (without a parent there) in the last year. My younger child sometimes spends all night with her brother and sometimes comes over in the middle of the night or in the early morning.

Some other parents are horrified when they hear this. They raise concerns with my children's independence. Because sleeping alone is seen as a milestone just like tying their shoes or going to school. If I'm totally honest, my decision not to make them sleep alone is partially fueled by laziness. Who wants to sleep train if you don't have to? My kids still get plenty of sleep. I get plenty of sleep. I'm happy with how things have progressed. Why rock that particular boat when there are so many other things for me to be concerned about?

The queen-sized bed is also pretty huge for my kids. If they want to snuggle, then can. If they want a wall of pillows between them, that's an option. If kid number three comes along in a few years and wants to crawl in there with them, it'll probably work out just fine.

I also don't buy that we are meant to learn to sleep alone. I mean, surely our ancestors looked out for mountain lions for each other. Sleeping alone in a survival situation is not as ideal as being surrounded with other people. I slept alone my whole life, except for those times I would get frightened and climb into bed with one of my siblings. And, guess what? As soon as I was an adult and had someone I was close to, I chose to share a bed with him. And it wasn't all about sex. I loved sharing a bed with someone, to not feel isolated when, in a lot of ways, I felt the most vulnerable.

I'm not guessing my kids will always want to share. I know that once I was a teenager, I was really glad for my own room and my own space. But being glad about it was maybe a six-year span in a 30-year life so far. I know at some point, if my kids continued to share a bed, I'd get strange looks from people who are scandalized that my children share despite being different sexes. (That's a whole other matter.) But as soon as their sleeping together isn't working, or one of them doesn't like it for whatever reason, we have a twin bed waiting in the wings.

Another benefit to our two-rooms-with-queen-beds situation is just how flexible we can be. If a kid is sick, they can have one parent with them while the other can still sleep comfortably with the other child. If I'm reading to the kids at bedtime and I get sleepy, there is plenty of room for me to crash there for a while. (This was me the entire first half of my third pregnancy, passing out as soon as my kids were quiet.) The queen-sized bed is also pretty huge for my kids. If they want to snuggle, then can. If they want a wall of pillows between them, that's an option. If kid number three comes along in a few years and wants to crawl in there with them, it'll probably work out just fine.

I certainly think that the fact that they've had people stirring and snoring next to them their whole lives means that they can sleep through it better than kids who have learned to sleep alone.

Once, in my midwife's office, I opened a book all about "the family bed," which is a term I really balked at using at using at first. I sleep-shared with my kids mostly due to logistics and instincts and not some hippie ideal about community. (I actually love hippie community ideals, but this didn't really factor in this particular decision.) And as I flipped through, with my own mother next to me, I remember rolling my eyes about a certain concept. The book said that learning to sleep next to someone was a learned skill. Basically that there is a learning curve, and if you want to share a bed someday with your kids or your partner, it'll be easier if you shared a bed with your parents. I may have scoffed at this at the time, but it's possible the authors were onto something.

My kids are great sleepers. They're not always easy to get down in the first place, and they might get up in the middle of the night for a change of scenery, but when they are asleep, they're out. And they stay that way for enough hours at night for me to feel well-rested most of the time. They don't wake up at every slightest noise. They tolerate being moved and shoved over and snuggled with, and if it wakes them up, the just get comfortable again and fall right asleep. I don't know if I can take credit for these miraculous things. (Miraculous because all moms have memories of utterly failing when transferring a baby from their arms to a crib so they can pee.) But I certainly think that the fact that they've had people stirring and snoring next to them their whole lives means that they can sleep through it better than kids who have learned to sleep alone.

I'm sure putting siblings together in a bed is not something that works for all kids or all families. I'm not sure I can count on the fact that my kids will continue to want to share, or that this next baby won't actually do best when he's sleeping alone. But I know that none of these things are going to stress me out. I'm going to continue to go with the flow and to allow my kids to sleep with another person if they want. And if it's me they want to snuggle with, I'll take it.