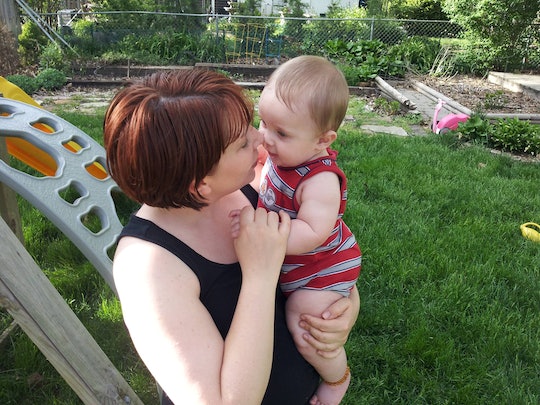 Life as a new mom was so much harder than I thought it would be. Maternity leave was just three months of sleep deprivation, and I experienced postpartum depression and every breastfeeding problem in the book. In other words, maternity leave wasn't magical, or pretty, but I survived. Once it was over, though, I felt like I was back at square one. Worse, I discovered that being a working, breast-pumping mom sucked — literally and figuratively. Even when your employer claims to be "breastfeeding-friendly" and follows the law about breast pumping at work, it still might not be possible. Not only is pumping a notable amount of breast milk ridiculously hard, but there's apparently a huge difference between "following the law" and actually supporting pumping moms.

I took time for me to learn not only how to pump, but also the laws associated with pumping at work, my employer's policies, and my rights as a breastfeeding mom. I was pleased to learn that my employer seemingly went above and beyond what is legally required, especially when it came to breast pumping in the workplace. They had an official breastfeeding policy, designated lactation rooms, a person to contact for information about lactation services, and even private mini-fridges you could use in your office so you didn't have to store your breast milk in the break room. Sounds awesome, right? I thought so.

Unfortunately, when I returned to work after maternity leave and tried to actually pump at work, my experience was decidedly not awesome. None of these policies or benefits actually worked for me when they were put into practice. For example, it was ridiculously difficult for me to get information about where or when I could pump. I had questions, and no one, it seemed, had answers.

The designated lactation rooms? Well, they were all in other buildings. They were never free when I needed them, either, even if I called ahead to reserve one. So, I decided to pump in my office, which was fine, but meant that my staff would knock, get upset that I took frequent breaks, and even walk in on me, despite the huge sign lactation services issued for my door labeled "Do Not Disturb." Awkward.

All the official policies in the world won't prevent your boss, co-workers, and other random people in the hallway from shaming the hell out of you for pumping at work, either.

When I asked my boss about my options, she said she was so glad I was breastfeeding and that of course I could take breaks to pump. That sentiment only lasted until I had to leave a meeting early, though, because my breasts were rock-hard and I had breast milk leaking through my shirt. So, I tried calling the lactation coordinator for advice, but the number had been disconnected. And those amazing mini-fridges I had heard about? I called five numbers before I discovered that they no longer existed.

All the official policies in the world won't prevent your boss, co-workers, and other random people in the hallway from shaming the hell out of you for pumping at work, either. When they see you put bottles of breast milk in the break room fridge, or when they realize just exactly what you have been doing three times a day with the lights off in your office, they won't be pleased. It honestly started to impact my career, my relationships with co-workers, and my confidence in myself as a working mom trying to "do it all."

While the brochures and classes make it seem so easy, almost every mom I know has faced challenges pumping at work, from breast milk supply issues to actually being fired for taking breaks to pump.

I was so shocked to have to deal with shaming about pumping at work, because I sort of thought it was illegal. Like, didn't the Affordable Healthcare Act change the law for pumping moms at work? The answer is, well, sort of. The law requires “reasonable break time for an employee to express breast milk for her nursing child for one year" and, "a place, other than a bathroom, that is shielded from view and free from intrusion from coworkers and the public." Which all sounds awesome except, according to the US Department of Labor, it only applies to some employers (with 50 or more employees) and some employees (non-exempt, hourly). And there are exemptions for employers who an "undue hardship." If you are confused by this, don't feel bad. It is confusing, vague, and open to interpretation.

So, as committed I was to breastfeeding my son, pumping at work quickly became way too much for me to manage. I mean, being a working mom was hard enough without having to try to pump three times day and deal with all sorts of shaming and guilt and judgment. So I stopped. I'm not alone, either. While the brochures and classes make it seem so easy, almost every mom I know has faced challenges pumping at work, from breast milk supply issues to actually being fired for taking breaks to pump.

The so-called "breastfeeding" policies we have aren't even close to enough, at least in my experience.

Romper spoke with Rini Ghosh Chakraborty, a professor, health policy researcher, and mom, via email. As a new mom, Chakraborty tried to make pumping work, too. She writes, "I went back to work three weeks after giving birth via C-section. The whole experience was traumatizing. I'd teach, run to one of the three pumping rooms on campus, barely get 20 minutes of pumping — enough to stop me from leaking during lecture — pack up everything, and then rush back to teach my next class."

I don't know about you, but I am exhausted just reading about her pumping routine. Understandably, she wasn't able to keep it up. "The day I dried up was the best. I cried in shower out of sadness, but while I stood in line at the Dunkin Donuts between classes for the first time in months, I cried because that glorious moment couldn't get more liberating," she writes.

So, how can we as a society support working moms in actually pumping at work? I mean, it's 2018, so you would think that we wouldn't make moms choose between having careers and having or feeding babies, but it sometimes feels like employers are doing just that. The so-called "breastfeeding" policies we have aren't even close to enough, at least in my experience. According to Chakraborty, the real problem isn't pumping rooms, it's a broader question of support for working moms, which starts with paid parental leave.

"My university provides lactation rooms. For me, that wasn't the problem. Rather, the fact that I live in one of the only countries that doesn't federally-mandated paid maternity leave. If I could, I'd wave a wand so that no mother would have to go back to work while attempting to breastfeed an infant," Chakraborty says.