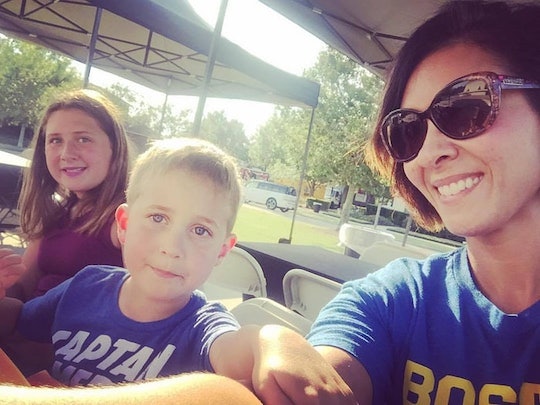 My Ability To Have Kids Doesn't Mean My PCOS Isn't Debilitating

There's a lot of misconceptions about what it means to live with polycystic ovary syndrome (PCOS). And because people can't see what's causing me pain, my symptoms and my suffering are often overlooked. But I've had PSCOS for over 20 years, and my ability to have kids doesn't mean my PCOS isn't debilitating. If anything, my children are constant reminders that I suffer from a hormonal disease that doesn't have a cure, that flares up without so much as a warning, and made it incredibly difficult for me to become the mom I am today.

More Like This
Therapist Says: Alone Time For Moms Is A Necessity, Not An Indulgence
Lightning Crotch Can Actually Tell You These 7 Things About Your Pregnancy
Give Your Mom A Shout-Out With These Mother's Day Hashtags
These Alternative Names For Stepmom Are Sweet & Meaningful

According to the U.S. Department of Health & Human Service's Office on Women's Health, PCOS is a hormonal imbalance that affects one in 10 women, and is one of the most common causes of female infertility. The disorder can cause diabetes, high blood pressure, unhealthy cholesterol, sleep apnea, depression and anxiety, and endometrial cancer, and includes symptoms such as an irregular menstrual cycle, acne, thinning hair, weight gain, skin tags, and ovarian cysts. It is possible to manage PCOS and its symptoms, but there is no known cure. So every day, as I am trying to parent my two children, I am living with a hormonal disorder that I know will stay with me for the rest of my life. And to have it downplayed simply because I am a mom is to disregard how debilitating this disease really is and all I have endured because of it.

When I was young and going through puberty, I was the girl with painful, irregular, heavy periods and pelvic pain that came and went without so much as an explanation. Years later, as a young adult, I was the partner who cringed in agony during sex, and the woman who endured numerous ultrasounds that detected multiple cysts that needed to be surgically removed. I was the patient who had to have an ovary removed from her body, and who relied on birth control to try and manage her hormones.

My pregnancy with my daughter didn't guarantee me a second, or third, or fourth full-term pregnancy. With PCOS, there are no guarantees at all.

I was also the woman who had a child, much to my relief. I was the soon-to-be mom who considered her pregnancy symptoms to be a welcomed break from the pain of PCOS. Morning sickness didn't seem "all that bad." Swollen ankles and an aching back weren't as debilitating as my period cramps. Not only was I thankful for the opportunity to be a mother, but I was grateful to experience some sort of reprieve from my PCOS symptoms. Even if that reprieve came with a side-order of nausea and the uncertainty of pregnancy.

A few years after my daughter was born and my husband and I decided to try and have another baby, I was the mom who had miscarried twice. I was the mom desperately trying to expand her family, only to experience D&Cs and more ovarian cysts. I was the mom pouring over fertility treatment information and weighing my future options, wondering if I would ever be able to give my daughter a sibling.

According to Paula C. Brady, M.D., Assistant Professor of Obstetrics and Gynecology at the Columbia University Irving Media Center, and Reproductive Endocrinologist at the Columbia University Fertility Center, for women with PCOS who become pregnant, insulin resistance and obesity may contribute an increased risk of miscarriage. "PCOS is a complex condition in which a variety of hormone levels (including testosterone and insulin) may be altered, causing ovulation (egg release from the ovary) to occur irregularly or rarely, instead of each month," Dr. Brady tells Romper via email. Not only does PCOS significantly reduce the chance of pregnancy, but it doesn't go away if and/or when a woman does become pregnant and successfully carries a pregnancy to term.

I live with pregnancy loss. I live with birth trauma. I live with the memories of secondary infertility. I live with debilitating pain, and all the while I am parenting my two children to the best of my ability.

My pregnancy with my daughter didn't guarantee me a second, or third, or fourth full-term pregnancy. With PCOS, there are no guarantees at all.

When my partner and I were trying to conceive and I was reeling from two miscarriages, it took everything I had not to look into my daughter's eyes and see nothing but my perceived failure. Was I going to fail to give her a sibling? Would my body abandon my desires and leave me wanting a family I wouldn't be able to physically produce? And perhaps more importantly, would PCOS take me away from my daughter? From the child I already had, standing right in front of me?

"If a woman goes without regular periods, she is at risk for hyperplasia (precancerous change) or cancer of the endometrium (the uterine lining that normally sheds each month during menses)," Dr. Brady tells Romper. The fear of not only missing out on the opportunity to have another child, but missing out on my daughter's life, was debilitating. Yet there I was, fielding disparaging comments from people who would try to assure me that my PCOS "couldn't be that bad." After all, I had a child. I was one of the lucky ones.

My partner and I decided we would go ahead and start IVF, but before the process began I found out I was pregnant. Forty weeks, more or less, later I gave birth to a baby boy, but at significant risk to my health and wellbeing. I almost died on the birthing table, my son almost died as I was giving birth, and the trauma of that experience has been as lasting as my PCOS symptoms. My fear of missing out on my daughter's life almost came true. My fear of never having another living child almost came true.

My kids are in 1st and 6th grade now, and while time has pushed my beautiful family of four forward my PCOS symptoms have remained. So please, don't tell me that just because I have two beautiful children that my PCOS is somehow nonexistent. I live with pregnancy loss. I live with birth trauma. I live with the memories of secondary infertility. I live with debilitating pain, and all the while I am parenting my two children to the best of my ability.

My pain is valid. And if you live with PCOS, yours is too, regardless of whether or not you're a mom.