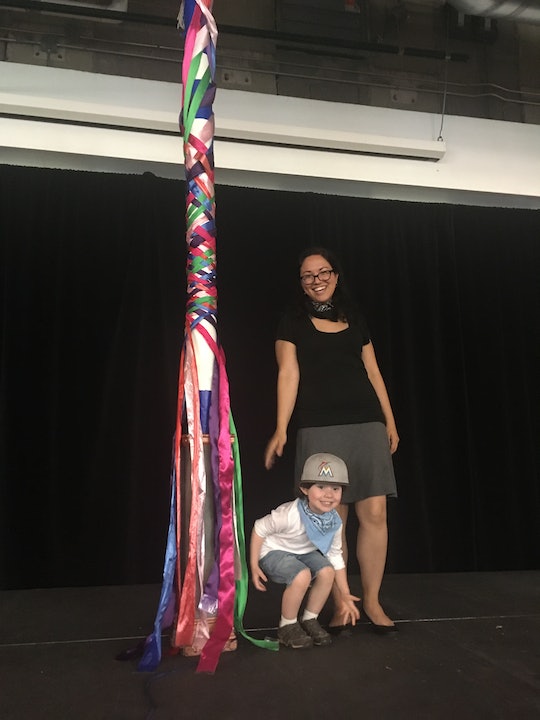 My Son & I Have Nothing In Common, & I'm Positive I'm The Problem

It's relatively common to hear a parent lament about their unruly teenager. The parent can't connect with them, they don't understand them, and they can't seem to get their teenager to listen to them. I felt like an alien when I was a teenager, so I'm aware of what lies ahead. Then again, how could I not fall head-over-heals in love with my son every single day, especially when he's young, right? Wrong. When my son turned 4 I was hit with the sudden realize that maybe my son and I had nothing in common. And if that was a case so early on in the parenting game, what kind of chance did I stand when he became that unruly, distant, defiant teenager?

As a 4-year-old my son's personality is just now starting to really blossom, which is why, I think, it took me four years to feel this very specific kind of panic. When he was 2 and 3 he was really into Thomas the Tank Engine, eating cheese, and climbing up and down the sofa. No, Thomas isn't what I would consider riveting entertainment, but cheese is awesome and our sofa is pretty cool, so I could relate and get on board.

But now my son is all about cars. Like his father, he's completely fixated on them and memorized by them. The problem? Well, it's not really a problem... it's just that cars aren't my thing. And since I have nothing to contribute during care-related conversations, more often than not I feel like I can't connect to the one thing my son is obsessed with.

When my son was younger it was much easier to connect to him in various ways. Thanks to cuddles, kisses, dramatic readings of Goodnight Moon, Corduroy and The Little Engine That Could, epic shadow puppet shows and activity books, Playdough sessions and trips to the playground, I was able to bond with my baby. When I was able to teach him whatever bit of Spanish he'd actually listen to, and have dance parties with him that ultimately lead to my son professing "Rock The Casbah" by the Clash as his favorite song, I felt close to him and connected to him.

I needed to shift my expectations, give him space to explore his interests, and realize that my feelings were less about me as a mom and more about me and my anxiety.

But when he turned 4 I felt a sudden and palpable shift from my little boy. The other day, during a fit about taking a bath, my son told me — for the very first time — that he didn't like me. Tantrum-throwing kids are going to tantrum, to be sure, but it hurt. And one day I asked him what kinds of things he enjoyed doing, and he flat out told me he only likes going to the drag strip and race track and that he didn’t like doing things with mom. More and more often I'm feeling left behind.

So I decided to do something I’d never done: I signed him up for summer camp at our local Latinx art museum. The facility was hosting a special camp all about Nicaragua, where my family is from. Since we live in Colorado and so far away from our Nicaraguan relatives, I thought the experience would be a great way to not only reconnect with my son, but connect him to part of his roots.

I was overjoyed when he seemed excited about the idea... but that excitement quickly faded.

My son ended up struggling at that camp. Despite options to participate in theatre, dance, music, and visual arts, he was sent out several times because he was being disruptive. His favorite part of the day was walking between buildings. While I knew chances were high that my 4-year-old wouldn't be entertained by a program designed to celebrate part of his heritage, his rejection of the activities made me feel defeated. All my son wanted to do was play with cars. He wanted to go to races, not sing Spanish songs.

No matter what new things I showed him, or what fun activities I facilitated, my son seemed disinterested. Was this just the beginning? Was I raising a human being who would never had anything in common with me? At the tender age of 4, was my son destined to resent me and everything I love and find interest in?

Children, much like the adults who care for them, change a lot over time.

Turns out, for better or worse, I'm not alone. After asking other moms if they had ever felt this way I realized that I was not, in fact, the only parent of a young child that had experienced this disconnect. And like most other moments pertaining in motherhood, most moms assured me that this moment — however painful and isolating it may feel at the time — would pass.

And that's when I realized that while I am entitled to my feelings, I was putting way too much pressure on my son. I needed to shift my expectations, give him space to explore his interests, and realize that my feelings were less about me as a mom and more about me and my anxiety. As a mom who struggles with issues of anxiety, post traumatic stress disorder (PTSD), and potentially Premenstrual dysphoric disorder (PMDD), I often forget to invoke self-care in my life to make sure I’m caring for my mental health. And when I stop taking care of myself via meditation, yoga, and therapy, I rely on my son to bring me joy. When he wasn't, I allowed his actions to negatively impact my mood.

Children, much like the adults who care for them, change a lot over time. My son will probably be fixated on cars for a while... or for forever, who knows? In the end, I’m cool with taking him to the drag strip to watch a race. Who knows, maybe one day he’ll enjoy watching The Sound of Music or checking out an anthropology exhibit.

No matter what he ends of loving, he will always be my son, I will always love him, and we have a lifetime to figure out what else we'll have in common.