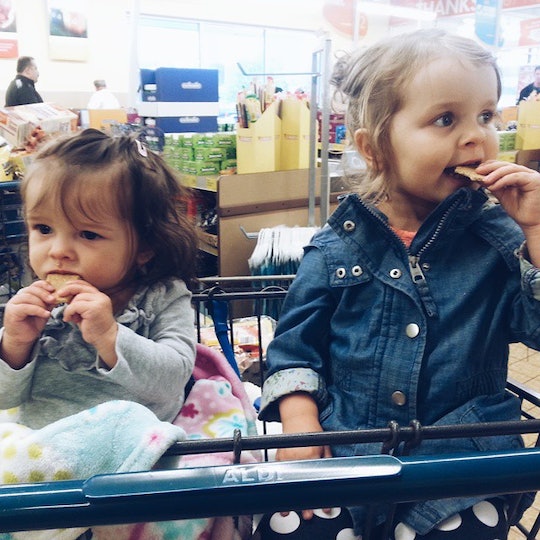 No, I Won't Call My Daughters "Picky Eaters"

Convincing your child to eat may be one of the great battles of parenting. In fact, it seems like parents, in general, fear the dinner table. You don’t have spend much time browsing parenting blogs or clicking your way through Pinterest before someone on the internet is promising to solve your “picky eater” problems for good. Honestly, even if your toddler eats everything you put in front of them (not going to happen), dinner time is still hard. There’s the loud talking, the sibling squabbles, and endless rounds of rapid-fire questions. Depending on the day, there might also be hot dishes to keep clear of toddler fingers, a crabby significant other, and a pet whining for scraps from underneath the table. So, it completely makes sense why negotiations with someone who insists on living on peanut butter toast is enough to send most parents over the edge.

Chaotic dinners suck and as a self-prescribed foodie, there isn’t a lot more perplexing to me than someone who turns up their nose to a home-cooked meal. Still, after our fair share of dinner-time failures, my husband and I decided to cut our losses and wave the white flag: We stopped paying attention to our kids’ picky eating habits. But then we took it one step further. Our girls might pick at the food we set before them more often than we'd like, but we absolutely refuse to call our kids picky eaters.

I didn’t always feel this way. For months after my oldest started eating table foods, I obsessed over what went into her mouth. We battled over sweet potatoes, green beans, and pasta on a daily basis. I was dead set on having a healthy eater and I was frustrated to find I had a picky eater instead. I was committed to fighting this fight for as long as necessary, but a personal battle changed my mind completely.

One of the biggest reasons I started seeing a therapist was because I felt I was an emotional eater and wanted to learn to better handle the stress in my life without food.

Not long after my daughter was born, I started therapy because I wanted to heal some longstanding habits in my own life. One of the biggest reasons I started seeing a therapist was because I felt I was an emotional eater and wanted to learn to better handle the stress in my life without food. Instead of a 10-step plan to better self-control, my therapist suggested a book called Intuitive Eating that explained how much damage dieting over and over again had done to my body and my brain. I quickly realized that my emotional eating was not my problem, it was a symptom of a crappy relationship with food caused by way too much self-criticism of my eating habits.

In the book, there was also chapter about raising kids with a healthy relationship with food. As it turns out, going toe-to-toe with my daughter isn’t a great approach to teaching her how to trust her body to tell her when she's hungry and full or to accept herself as she is. Specifically, focusing on a child’s eating habits, especially forcing them to finish what's on their plate, has been linked to obesity later in life. As parents, when we question our child’s taste buds or their ability to determine if they're hungry or full, we actually unintentionally teach them to ignore the natural hunger signals their body is equipped with.

That was when I realized that, even though I meant well by pushing my toddler to eat healthy foods, I might be setting her up for a difficult relationship with food in her future. As someone who has dealt with poor body image and has a complicated history with food and diets, that's the last thing I wanted for my daughter.

The more I call my daughter a picky eater, the more she'll start to believe that she isn’t capable of being adventurous or trying new foods.

I also learned that labeling is always a bad parenting approach. By calling my daughter a "picky eater" and focusing so intently on fixing that part of her, I was applying a label to her that could shape her identity. At 18 months old, I'd already decided for my daughter that she was picky and had said it out loud in frustration more than once. According to Dr. Dina Rose, these type of labels can actually limit how a child is able to see themselves as they grow up. So, the more I call my daughter a picky eater, the more she'll start to believe that she isn’t capable of being adventurous or trying new foods.

From that point on, I swore off dinnertime battles over food and promised to strike the words “picky eater” from my vocabulary. Now I have two toddlers and I am sitting on my hands and keeping my mouth shut at the dinner table. They're learning to explore new foods on their own timetable and sometimes this means they finish their plates and sometimes it means they eat two bites and ask for a snack an hour later.

It isn’t easy, letting go of control or making the not-so-popular choice to let your 2 year old make her own choices at the dinner table, but I'm willing to keep at it, knowing it's what I believe is best for my child. And, in addition to setting my kids up for a healthier relationship with food, chilling out about what my kids do and don’t eat has also cut back on some of the typically dinnertime chaos. I may not be able to sibling squabbles, but I can end the battle over food and bring more peace to our dinner table.