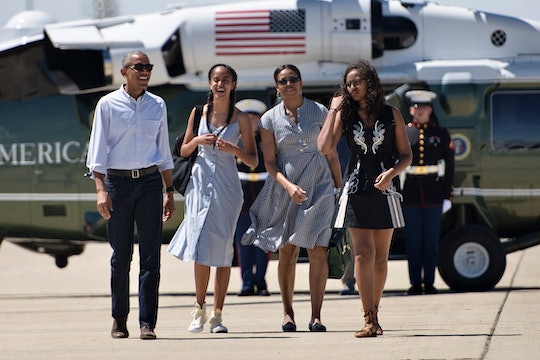 Obama's Heartfelt Comments About His Daughters

On Wednesday afternoon, President Obama gave his final press conference and touched on a whole bunch of topics. But one of the most interesting things he revealed is that the two Obama daughters were disappointed by the election results — in large part because they, too, were floored by Michelle Obama's speeches on Hillary Clinton's campaign trail. "They paid attention to what their mom said during the campaign and believed it because it’s consistent with what we’ve tried to teach them in our household and what I’ve tried to model as a father with their mom and what we’ve asked them to expect from future boyfriends or spouses,” he said.

In his farewell address, he said the same sort of thing. That disappointment in politics shouldn't be a reason to curl up on the couch with a Real Housewives marathon, but a motivating factor in getting out in the world and working for causes you believe. That's easier said than done, but it's a nice thing to remember.

Obama said that he thinks the girls will definitely stay out of politics (like their mother), but that they sort of just can't help being patriotic and active citizens. Then again, Malia is off to Harvard University once her gap year is over and Sasha is apparently hitting the books pretty hard, too. Maybe they'll come around once they're older and bring back that Obama-style to the White House.

The president said that even if they don't get into politics, they'll be in-tune with what's going on around them:

I think they have, in part through osmosis, in part through dinnertime conversations, appreciated the fact that this is a big, complicated country, and democracy is messy. It doesn't always work exactly the way you might want. It doesn't guarantee certain outcomes. But if you're engaged and you're involved, then there are a lot more good people than bad in this country.

Of course, Obama gushed about the girls in general, as he tends to do, because really loves and respects his two daughters as any good parent does. It's nice to watch.

"Every parent brags on their daughters or their sons," the president said this week. "If your mom and dad don't brag on you, you know, you've got problems." Obama said that the girls were "something," and that they "surprise and enchant and impress" him every day. (Someone pass the Kleenex, please.)

To be real, though, Malia and Sasha have enchanted and impressed most Americans over the past right years. They're smart, they laugh at their dad's stupid jokes, listen to Beyoncé, and goof on each other — they're just all around awesome. And they definitely got it from their mom and dad. Hopefully they'll get personal Twitter and Instagram accounts ASAP, so that the country won't miss them too much when they leave the White House.