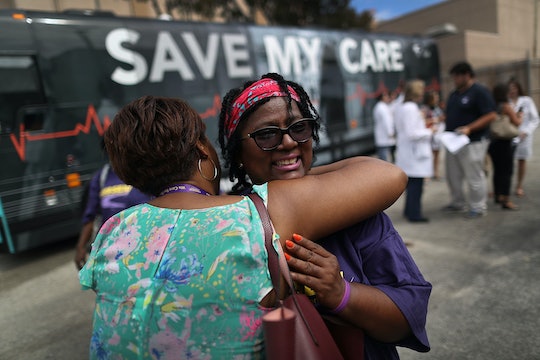 "Obamacare Helped Me" Tweets Are Powerful

On Thursday, the Republican-controlled House is expected to vote on repealing and replacing the Affordable Care Act, known by many as "Obamacare." Legislative and health care expects across the board have noted that the GOP replacement plan and its amendments are only going to make health insurance more expensive with substantially less coverage. From giving states the choice to opt out of pre-existing condition coverage and essential benefits, the American Health Care Act could be ruinous for millions of Americans, and they're letting the world know on social media. "Obamacare Helped Me" tweets show that repealing the immensely popular health care law isn't just a budgetary inconvenience — it's a matter of life and death.

Even when a majority of Americans want to keep Obamacare, according to a March poll from Monmouth University, the GOP has decided to put their contentious and poorly-written ACA replacement bill up for a vote on Thursday. It's not yet known how much the Republican's plan to repeal and replace the ACA will cost — but what is known, based on what little legislative language has been made available to the public, that Trumpcare will increase health care costs pretty much across the board for everyone — and especially for the people who have benefited from and need the ACA the most.

On Twitter, #ObamacareHelpedMe began trending Thursday morning after Democratic Coalition co-founder Scott Dworkin pitched the hashtag in advance of the House vote, with people sharing their stories in a last-ditch plea to lawmakers to save the care they so desperately need.

The Affordable Care Act has literally saved lives, as people revealed when sharing their emotional Obamacare stories on Twitter.

The ACA has also given millions of Americans the ability to lead a healthier quality of live they wouldn't have otherwise been able to without the coverage and types of care mandated by the health care law.

As so many of Thursday's "Obamacare Helped Me" tweets revealed, the ACA saved the lives of so many children. Parents of children with pre-existing conditions, as well as rare and other life-threatening medical conditions took to Twitter to share their deeply moving stories of how the ACA saved their children's lives — not unlike those of late night host Jimmy Kimmel's monologue about his newborn son on Monday.

On Wednesday, New Jersey Sen. Cory Booker spoke with MSNBC's Chris Hayes about how Americans' lives are on the line if the ACA replacement health care plan becomes law. "This will cost American lives if it ever becomes law,” Booker said on MSNBC, adding that repealing Obamacare "will mean death.”