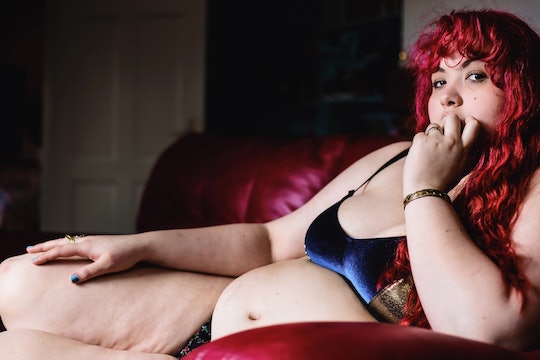 Oh, Now That I've Given Birth You Don't Want To Touch My Magical Belly?

In the last trimester of pregnancy, I found myself completely taken aback. It wasn't the sleepless nights, grueling back pain, or sudden appearance of the linea negra that did it — these things, I expected. What shocked me most was how often people wanted to touch my pregnant belly. Once my tummy popped, it was as though extended family members, not-particularly-close friends, doctor's assistants, and strangers alike simply couldn't get enough of the ~magic~.

As a plus-size woman who's been fat on and off since childhood (mostly on), I am used to my stomach being cause for "concern" and mockery by passerby. When I wear a low-rise bikini or skintight skirt, the outline of my belly regularly results in stares, jeers, and confusion. I'm used to having to defend my right to take up space; to being treated like a human being, and not some problem to be solved. I'm used to being avoided on public transportation. I'm used to seeing fellow flight passengers cringe as they realize that they'll be sitting next to the fat chick.

Once again, my size has become a "problem" to be solved, and I am no longer an embodiment of evolutionary wonderment.

What I have never been used to is a constant stream of positive attention — the kind a pregnant belly seems to inspire. It was only when people began to eagerly place their hands on my stomach that I realized just how much humans love babies. We like how cute they are. We appreciate how weird and uncoordinated they can be. We enjoy their delicious-smelling heads and tiny feet.

What we don't love, however, is fatness. Baby fat on toddlers might get a pass because it makes them look cuddly. Pregnancy weight gain might get a pass because it's so undeniably natural. Fat, non-pregnant adult bodies never get a pass, though. My partner and close confidants excluded, no one's wanted to touch my "magical" belly since my daughter was born 11 months ago. Once again, my size has become a "problem" to be solved, and I am no longer an embodiment of evolutionary wonderment.

What I'm struggling with is the reminder that bodies like mine are so rarely considered "magical," "special," or "beautiful" unless there is a baby inside them.

Don't get me wrong: I don't expect strangers to give me an impromptu belly rub at any time of day or night. I don't need my extended family to touch my non-pregnant tummy as a sign of their love. I don't want to be touched without my consent, in general.

I suppose what I'm struggling with is the reminder that bodies like mine are so rarely considered "magical," "special," or "beautiful" unless there is a baby inside them. I struggle to accept that my body will only be treated with respect, tolerance, and empathy by the masses when I am expecting — because only then do sociocultural norms seem to tell us it's OK to be fat.

If I'm being honest, the positive attention my belly received when I was pregnant started to feel kind of good. Finally, folks around me seemed to realize that my bigness needn't be considered repugnant or distressing. Although I don't like to depend on others for validation, I have to admit that this was encouraging. I have long loved my body, and treated it as a friend, but pregnancy has been the only time in my life when the vast majority of people around me did the same. It was an experience that was hard to let go of post-labor.

I know that fatphobia is, culturally, rampant. Our movies, TV, tabloids, health practitioners, and great aunts are (by and large) quick to tell us that fatness is deplorable, ugly, bad, and nothing more. The weight-loss industry is one of the most profitable industries in the U.S. alone. Weight-loss shows are similarly popular. Most of us are conditioned to treat fatness (and subsequently, fat people) poorly before we even have a concept of our own bodies and their needs. We are taught to dehumanize entire groups of human beings as a way to ultimately "help" them.

I don't doubt that many people avoid touching my body for these reasons. Nonetheless, I find these "reasons" to be absolute BS. This kind of blind hatred against entire groups of people is wholly unacceptable — and the stark contrast between perceptions of my pregnant and non-pregnant tummy is but one example of how fat shaming manifests day-to-day. Quite simply, I'm not having it. You don't have to have it, either.

Whether people want to touch my belly or not, this will all remain true.