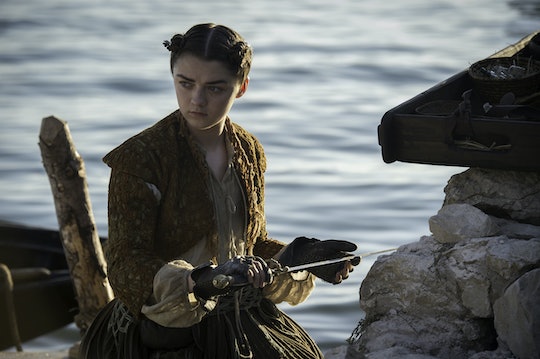 Hey girl! What's up? How's Braavos? Is the weather good? Is the food good? Do you have good friends? Sorry, I haven't really written a letter since I was 8 and had an uninteresting pen pal, so this is the level of epistolary skill I have to work with. Anyway, I'll just cut to the chase. Consider this an official request. Arya Stark, I want to adopt you.

I know this is probably a little bit awkward. For starters, while I'm technically old enough to be your mother, I don't feel like I'm old enough to be your mother. I frankly couldn't imagine having a teenager at this point in my life, but for you I would make an exception. Also, you pretty much seem to have your shit together already, without parents or guardians or, like, a home. Meanwhile, I walked out of the house with two different colored ballet flats this morning. And not even, like, navy blue and black. One was black and one was red. Also I don't really get how a 401K works. At all. And I routinely call my mother to ask how long I need to cook something for. Point is, whereas you seem to be adulting very well at age...however old you are now... I do not adult well as an adult. Nevertheless, I don't think this should stand in the way of my proposed adoption of you. Because I just know I am meant to be your mother.

How can I begin to enumerate everything that makes you a BAMF? You're brave, smart, and scrappy. You're talented, compassionate, and you never allow other people's expectations of who you should be define you.

Do you know how rare it is for a grown-ass woman to be able to that, let alone a young girl? This points to the fact that you are destined for greatness, not that you haven't done some great things already.

On the subject of great things you've done... Arya? You have magic powers. And soon, I suspect, you'll be able to change your face into other people's faces, and that would be an awesome trick to whip out at family gatherings and Thanksgiving dinners. I would be honored to be the mother of a shapeshifting warg. If we're being honest, I'm basically crushed that my current children aren't shapeshifting wargs. We're working on it, though.

Speaking of families, when it comes down to it, you're a good sister, so I think you would love having my children as siblings. I know you had a complicated relationship with Sansa, but your closeness with Jon Snow coupled with your desire to protect your friends shows me that you're devoted to protecting those you love. And I guarantee you would always have a fencing partner with my son (your brother) around, even if he's no Syrio Forel (unless he's been Syrio this whole time disguised as a four-year-old boy, which I wouldn't put past Syrio).

Arya, my dear girl: What is it about you that makes everyone root for you? Like, do you seriously know how difficult it is to be more or less universally loved in Game of Thrones? It's basically impossible. I think only Tyrion tops you for sheer fan love. You manage, somehow, to be complex and multifaceted without alienating people with your not-so-great qualities.

Speaking of your not-so-great qualities though: can we talk about the whole assassinating people thing? Honey. Maybe we can tone that down a little. Because it's getting... well, it's getting a bit creepy. I'm not convinced you don't like it, is the thing, and not just from a desire to effect justice. I think you may like it like it.

I don't know if I'm encouraged or terrified that you didn't start out torturing animals like other sociopathic killers. On the one hand, it gives me hope that you aren't actually a psycho-killer but you're just a poor girl working out trauma. On the other hand, it's like "Damn, you skipped the minors completely and went pro right away."

And this is actually why I want to be your mom and not just, like, your significantly older friend. I'm worried about you. Because just because you are capable of moving through life like an adult doesn't mean you should. Life (and the Lannisters) have dealt you a spectacularly shitty hand, and it's made you hard and bitter. But it wasn't all that long ago that you were a sprightly kid, zipping around Winterfell constantly bumping into servants.

I'm not saying you need to forget about everything that's happened to you, and I'm not saying I can heal your trauma. I am saying that I'm a mom, and as a parent it is hard to watch Game of Thrones and wonder, week to week, if you're going to be okay. Not, like, will you survive. You're seriously pretty much the only character I'm not worried about in terms of dying. But I'm worried that you're going to go all Anakin Skywalker to Darth Vader on me any minute, and I feel like a strong motherly influence can probably help you.

And so I write you with this humble request, already half knowing your answer...

Until then, I live in hope if not optimism.