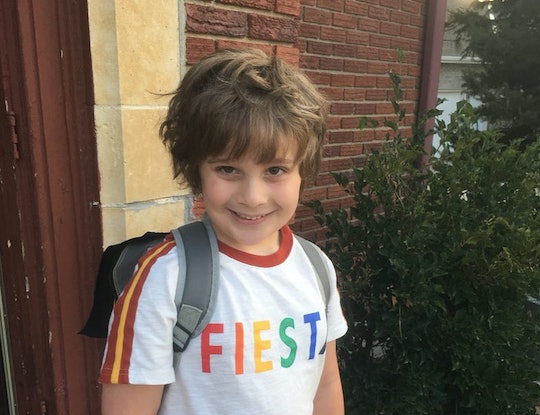 You don't know me, but rest assured I will never forget you. I was shopping with my 5-year-old son when he threw an epic tantrum in the toy aisle at Target. It was one of the worst he'd ever thrown, but his unabashed rage wasn't the worst of it. As I knelt on the floor, trying to comfort my baby, I saw you over his shoulder and the situation officially became too much for me to handle. You recorded my kid's public tantrum on your phone, and I couldn't believe it.

As much as I wanted to call you out in the moment, I couldn't find the words to describe how intrusive your actions were and how horrified I was. My son was struggling, and instead of walking away or perhaps even helping you decided to record two total strangers: an overwhelmed mom and an unsuspecting child. Every instinct in my body told me to leave my cart, grab my son, and run out of the store as fast as I could. But my child is large for his age and I can barely lift him, let alone carry him out of the store as he's kicking and screaming. So I was forced to stay on the floor with my child while you stood there recording a miserable, embarrassing moment.

Was my kid a perfect angel in that moment? Nope. Did I handle his tantrum with grace and effortless calm? Not really. But, even though the situation was a hot mess, the last thing we needed was for someone to record it.

I should have called you out. I should have asked to speak with a manager about your actions. I should have said something, but as my toddler threw his tantrum I felt more and more exhausted. So instead I just stared blankly at you and your phone as I pleaded with my son, wishing I could just disappear entirely.

Did you know I could see you from the floor of the toy aisle? Did you hope to have the next viral video of a Target tantrum? Did you think it was funny? Did you honestly think there's nothing wrong with exploiting the vulnerable moment of a child?

In the end, I have no idea what you were thinking. All I know is that you made a tantrum one of the worst moments of my parenting life, and I've been a mom for nine years.

I don't think a child throwing a tantrum is funny, or endearing, or some joke that we should all be laughing at. I don't post pictures of my crying, screaming kids on social media. I don't publish long-winded status updates about my kid losing their mind. I don't think an overwhelmed, emotional child should be considered entertainment or fodder for a few cheap laughs. All kids throw tantrums. All kids experience feelings they don't know how to process or articulate. And it's up to us, as parents, to guide them through it instead of make fun of them for it.

Whenever I see a mom struggling I try to let her know, with a kind word or a knowing look, that I can help her if she wants it. I want her to know that I've been there and that she's not alone. I don't expect everyone to react that way, though, and I get that not everyone has the time or emotional where with all to help a stranger in Target. But it's one thing to ignore a mom or refuse to help, and another thing to take advantage of an emotional situation.

Recording our vulnerable moment —presumably to laugh at it later or post it on the internet — was rude, cruel, and so violating. My son deserved better. I deserved better.

Perhaps you will read this letter and think twice about sharing the video you took of my son. Maybe you'll simply decide never to record another unsuspecting child again.

How are we going to raise empathetic, kind kids if we aren't empathetic or kind ourselves? My kid learned about "treating others as you would like to be treated" during week two of kindergarten. But you, an adult, decided to model the opposite kind of behavior and to my son's detriment.

I guess you're not alone, though. If you Google tantrum videos you will find hundreds of videos of kids crying, yelling, and otherwise losing their sh*t in public. Some are of celebrities, like the Duchess of Cambridge Kate Middleton, or Jane the Virgin star Justin Baldoni, who stayed cool during his toddler's meltdown at a Whole Foods. He captioned his Instagram post from that day, "I try to remember to make sure my daughter knows it's OK that she feels deeply." Obviously, couldn't agree more. But a parent posting a picture of their own child and a stranger recording someone else's are two entirely different things. I would hope, mom, that you would be able to tell the difference.

Perhaps you will read this letter and think twice about sharing the video you took of my son. Maybe you'll simply decide never to record another unsuspecting child again. In the end, I just hope you realize how your actions made me, a struggling mom just trying to be there for her child, feel.

The Mom With The Tantrum-Throwing Child