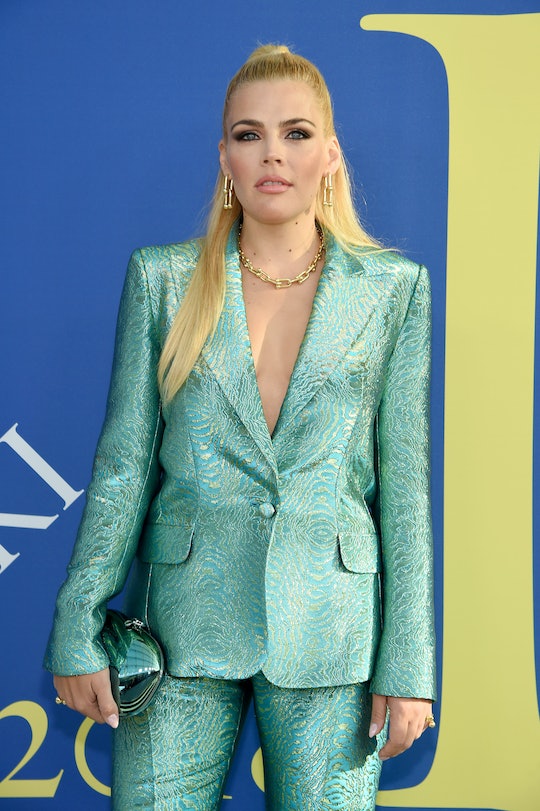 The internet can be a terrible place for moms, especially celebrities. No matter what a famous parent posts, someone will have something to say about it. For example, this weekend, Busy Philipps called her daughter "a Samantha" and some of her followers lost their minds.

Philipps is the mother of two girls, 4-year-old Birdie and 9-year-old Cricket. On Saturday, she posted a pic of Cricket making a face and she captioned it, "Always thought she was a Carrie, turns out she's a Samantha." For those who aren't fans — the names are in reference to characters from Sex and the City. Carrie was a hopeless romantic writer and Samantha was a powerful public relations specialist with a ton of attitude. She was also known for having sex. A lot of it. Some people's minds went right to the sex part and chastised Philipps for sexualizing her daughter, which is definitely not what she meant to do. Later, the actress updated her caption to explain: "Ok since some people don't get it, I am referring to the face she's making which looks like she's about to say "honey PLEASE". I'm not talking about anything else are you f*cking kidding me? She's making a face like Samantha, it's a joke, oh well nevermind ugh."

People must not have ever watched the show, because the face Cricket is making is totally a Samantha face. She's a dead ringer. Luckily, some of Philipps' fans understood. One person wrote, "Love the disclaimer! She is amazing and Samantha seems to be a strong great business woman who always helps her friends out. There is absolutely nothing wrong with being a Samantha." Another added, "That is definitely a Samantha 'oh honey' or Kim Cattrell 'go away' face!"

But others were aghast that she would compare her daughter to the character, even though she had so many amazing qualities. "Who says that about their kid," was the overwhelming response from these kinds of people. Not only did the haters totally miss the point, but they also don't give Philipps any credit at all. Like, of course she's not sexualizing her 12-year-old daughter. That's totally absurd.

Philipps is a talented, hilarious, badass woman and she's raising two girls to be just the same. Celebs aren't bad parents or people by default, which is what so many trolls on the internet seem to think. It's the same thing when a celeb is criticized for going down a slide with their kid or how they put them in a grocery cart. which are sadly things that happen all of the time. Let people parent in peace.

Philipps adores her girls. Last year, she wrote on Instagram that she hates when people put young women down:

I get so annoyed when people see I've got girls and they say "good luck in 5 years". Yeah, dude, I get it. Obviously, teenage girls can be tricky-lord knows I was. But ALL KIDS can be tricky. Maybe if we culturally stop putting this nonsense on girls from the time they're little, the teen years won't be AS difficult.

She added, "I just feel like if we stop rolling our eyes and saying 'good LUCK' like it's a chore to raise a young woman and start saying 'you are so LUCKY! to raise 2 girls,' the script will get flipped in terms of how we see them and how they see themselves." So if she says her daughter is a "Samantha," what she's really saying is that she loves how her daughter is outspoken, witty, and not afraid to show people how she feels about things. People on the internet really do need to lighten up.