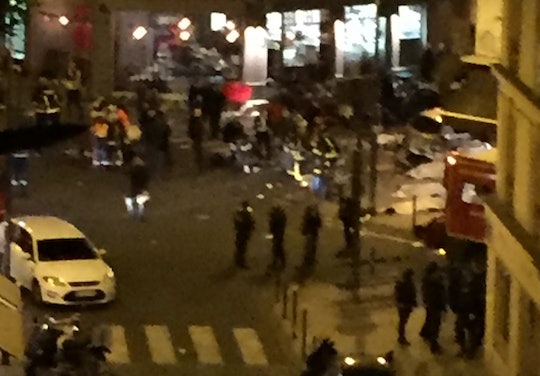 Photos Of Paris Shootings & Hostage Situation Show How Serious This Is

EARLIER: France's capital city was in turmoil Friday night following a fatal shooting in a restaurant and a hostage situation in a night club. The photos of Paris during the shooting and hostage situation reveal a widespread emergency that has resulted in France closing its borders.

Reporters and individuals on the ground began sharing personal photos and vines almost immediately, while professional photographers were also present to record the events as they unfolded. Amid a night of terror and unanswered questions, the photos told the story:

Images Of The Attacks Came In Throughout The Night

Attackers At Le Batalan Took Hostages. Only A Few Escaped.

Police And Emergency Workers Were Everywhere

Amid The Chaos, Parisians Began Opening Their Doors To Each Other

The Rest Of The World Expressed Solidarity

Update: Police have amended the death toll to over 40. France24 reports the assault in the Bataclan theatre has ended and two hostage-takers have been killed.

Update: AFP and the Associated Press are putting the total death toll at over 100. Police raided the Le Bataclan and killed two assailants, but other shooters and assailants are still at large. There is no risk to the U.S., according to authorities.