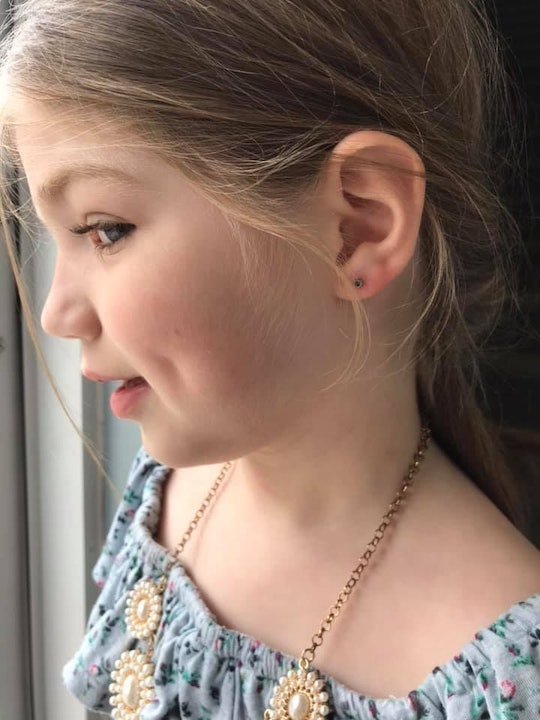 Piercing My Daughters Ears Was A Rite Of Passage. I'm Still Glad I Waited.

I've been waiting for my 5-year-old daughter to ask me when she could pierce her ears, so when that day came I was thrilled. I repressed the beaming grin I felt forming, opting instead for a casual, friendly smile, attempting to appear encouraging but neutral. "Sure, sweetie, I can make an appointment for you if you want," I told her, though my speedy enthusiasm belied any illusion of neutrality. Even though I'd been so excited for this possibility of one day piercing my daughter's ears, the reasons why I waited were important to me, and some of those reasons required that I not appear to eager at the very moment she decided this is what she wanted.

Growing up in a traditional Italian-American family, I always recognized ear piercing was an important right of passage for little girls. Often, it's also their first — most families I know generally have their daughter's ears pierced within the first couple months of life. Some families incorporate ear piercing in a child's pediatric checkup schedule, while others make a ceremonious trip to a mall kiosk. Either way, many an Italian baby girl has little gold studs before her christening, which is officially a much more important infant rite of passage.

My ears were actually pierced "late" for an Italian girl — I was 3 — but I really can't remember a time when I didn't wear earrings.

I always liked having pierced ears, and see view them as a sign of femininity and my Italian heritage. And who among us doesn't like sparkly things, right? But despite my own positive view of ear piercing, both personal and cultural, I was adamant that not only was I against piercing my infant's ears, I would never so much as bring it up. If she developed her own interest, cool, and I would allow her to get pierced whenever she asked. But if she didn't bring it up on her own accord, I vowed never to suggest it... even if I was secretly kind of hoping she'd be on "Team Earring."

My reasons for being in the "Anti-Infant Piercing" camp will be familiar to anyone who has spent even a little time in the so-called "mommy" corner of the internet, where the debate about piercing a baby's ears is fairly common and often contentious.

Dr. Corey Wasserman, M.D., a pediatrician at Weill Cornell Medicine and New York-Presbyterian, told the NY Post on July 20, 2018, "There isn’t really a specific age [recommendation for ear piercing] as long as it’s performed carefully and cared for conscientiously." But the American Academy of Pediatrics urges parents to wait to pierce their child's ears until they're old enough to care for them on their own, citing the high possibility of infection.

Personally, I believe that when it comes to children's bodies, anything that is not medically or practically necessary should be left up to them, especially if there's any degree of pain and or permanence involved. And while I don't feel that one must raise children in a completely gender-neutral manner in order for them to have a healthy gender expression (though power to you if you can, because OMG everything is so damn gendered), I did feel that piercing a baby's ears felt like more meaningfully gendering than, say, putting my daughter in a pink dress or sticking a bow in her hair.

However a family decides to approach ear piercing, the ultimate choice is personal one. But for me, the fact that the decision was my daughter's made the decision feel significant and special.

If my daughter ever wanted to get her ears pierced, I wanted it to be her call, because she wanted it, not because of my perceived notion of what was cute or culturally relevant or feminine.

But I also believe, despite the Mommy Wars, this is not a big deal. The sanctimony in either direction — either via the arguments I put forth or an outsize reaction against them — is an absurd waste of energy. If someone were to ask me what I thought they should do for their kid, I would happily share my perspective. But if they then turned around and said, "OK, fair points, but I think I'm going to go ahead and pierce my daughter's ears anyway," I'd shrug and not think too much of it. Because, at the end of the day, it really doesn't hurt all that much or for more than a minute, it's not permanent and, chances are if you're piercing your daughter's ears you're going to be gendering her in more ways than one.

Within a week of asking, my daughter had her ears pierced at a local tattoo parlor. She chose faux emeralds, her birth stone, as her first pair of earrings and handled the process like a complete badass, chatting about her big brother as the needle went through the first earlobe. She was a little bit more nervous about the second ear, but sat still, even as she teared up. She might have kept whimpering if the piercer hadn't announced, "All done!" which instantly turned whimpers to giggles. Afterwards, we went out for doughnuts.

Even though this wasn't the kind of ear piercing tradition I was used to — a parade of loving and excited aunties and grandmas parading a tiny infant through the mall — it felt significant and ceremonial, every bit as much a rite of passage as the alternative. However a family decides to approach ear piercing, the ultimate choice is personal one. But for me, the fact that the decision was my daughter's made the decision feel significant and special.