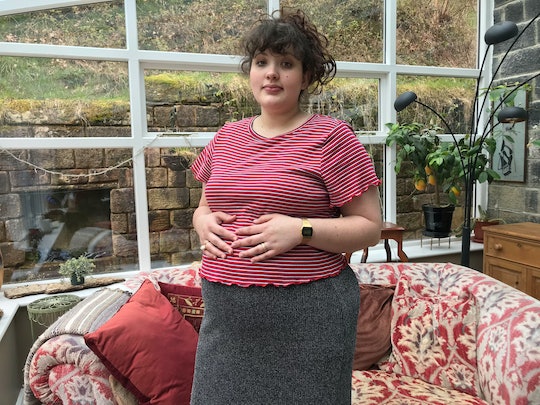 "They already have such different temperaments," my mother-in-law told me recently, referring to my 16-month-old daughter and the 28-week-old fetus in my belly. "This one's so much more active!" While it's true that I've felt this unborn baby's movements far more frequently that I did my first child's, I don't especially think that means much, except that maybe I'm paying more attention this time. Nonetheless, quite a few people have been quick to assign my fetus personality traits based on how active they perceive her to be. Words like "feisty," "energetic," "rambunctious," and "out-of-control" have all been used, in comparison to those regularly assigned to my 1-year-old.

Luna is "calm," "thoughtful," "affectionate," "sweet," and "mild-mannered." Her soon-to-be-sis is apparently anything but. That I have pretty debilitating back pain this time hasn't helped that perception much, either — regardless of how bizarre it may be to attribute this to the new baby being "difficult."

It's not uncommon to project characteristics onto unborn children, and some experts definitely believe personality begins within the womb. Dr. Catherine Monk, a researcher at Columbia University, told Psychology Today that "research indicates that even before birth, mothers' moods may affect child development." The publication went on to note that "in the growing fetus, the right-side of the brain, which governs affect, feeling, and creativity, develops more fully than the left-side of the brain, which governs language, abstract thought, and reasoning."

The truth is, however, that none of us have any idea what this new baby will be like.

Even if certain aspects of individual character begin to develop within the womb, however, they aren't necessarily anything we can analyze (no matter how hard we try). "Some women feel more movements and some feel less, and it depends on the position of the placenta," OB-Gyn Dr. Alex Polyakov told Australian parenting site Essential Baby. "The sleep cycle for a baby in utero is about half an hour, so there should be movements pretty much all the time [...] You might notice it more if you're lying down or not distracted," but there's no evidence to suggest that those movements can detect personality.

While I'm not an expert, I tend to agree — and I'm exhausted of having my unborn kid's personality dissected before she's even made her first appearance. Before she's had a chance to show us who she is herself.

The urge to project character traits onto the unborn likely stems from a whole variety of sources. When I hear my relatives muse that the new baby already has such a "different temperament" to Luna, I can't help but wonder whether this is a manifestation of their own fears regarding having a second grandkid, or niece, or godchild — fears I'm pretty sure most people in our family have. In their eyes, Luna is the most loving, special baby in the universe. Maybe part of them is worried that they won't find my second child as unique, or even as lovable, so the projection of characteristics they don't necessarily find positive serves as a way to justify those fears.

I'd be lying if I said I haven't done this on occasion, too. It wasn't until about 35 weeks pregnant the first time around that I really felt my daughter kick and shift in utero. At 28 weeks pregnant now, it's like I have an acrobatic residing in my core. I've joked that this baby is going to be a little bulldozer: fiery, upbeat, and fearless, while Luna is more reserved and cuddly. Again, this is probably a result of my inherent fears about having another child. I adore Luna's personality, and I do worry that if the new baby is too different, I won't bond with her in the same ways.

The truth is, however, that none of us have any idea what this new baby will be like. Even looking back on my first pregnancy, the lack of movement I felt hasn't correlated to Luna's personality. Yes, she can be calm and reserved at times. She can also flip the switch from one minute to the next, becoming rowdy, fussy, loud, or moody. It wasn't until her sixth month of life that signs of a developing personality started tangibly blossoming. Her love of music, for example, has grown more and more obvious the less blob-like she has become. Her loving nature — as evidenced in the constant hugs and kisses she offers those she cares for — wasn't really apparent to us until she was closer to the 1-year mark.

Although I've been guilty of projecting certain traits onto her, I'm choosing to be done with that.

For the first several months of my new child's life, we'll know very little about her because, let's be real, there'll be very little going on in her mind. Her existence will revolve around sleeping, drinking milk, and pooping. Maybe she'll be a good sleeper. Maybe she won't. This won't tell me much about the person she'll become, either.

Although I've been guilty of projecting certain traits onto her, I'm choosing to be done with that. I'm also choosing to stop people when they do the same. Any concerns we have mustn't interfere with how we allow ourselves to feel for this new kid, and it's unfair to her to proceed otherwise. I want to be open to loving her as fully as I do my first. I want to allow her space to grow, play, explore, and learn — both about the world and herself — without telling her who she is. I never want her to feel like she's second best, or unlovable, even if she's wholly unlike her big sister. I never want to feel like other people in our lives are treating her differently, either.

Instead, when I meet my new baby, I'm prepared to treat her as a blank canvas that only she can paint.