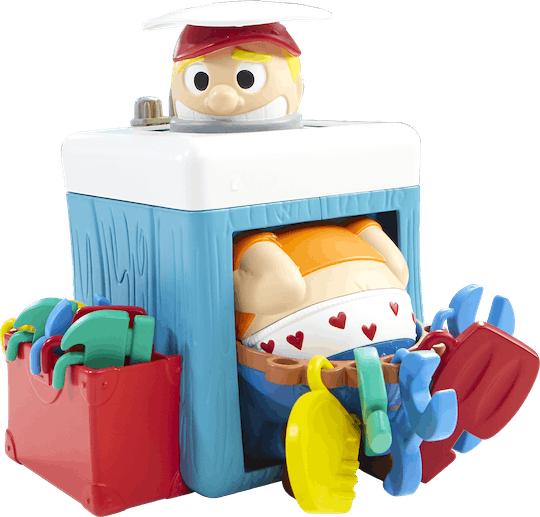 There are kids' games and toys based on surgeons, fishermen, firefighters, police officers, and veterinarians that teach kids about various professions and give them a glimpse of what they could one day become. The latest occupation to become the focus of a hot new toy? Plumbing! Hasbro's new game Plumber Pants is a competitive game with a clever premise that will leave your child in hysterics... and if they're the loser, a little bit wet, too.

The game will be officially unveiled at the New York Toy Fair this weekend in New York City, but Romper is giving you a first look at this gross-yet-hilarious game. Plumber Pants is just one of the many new games on Hasbro's roster (as well as is Porcupine Pop), and it's guaranteed to make a splash (pun very much intended).

In Plumber Pants, your child gets to play a prank on the unsuspecting plumber. As he works to fix a clog under a sink, players take turns stealing various tools from his tool box. One by one, they hook the tools onto his plumber's belt, which slips down to reveal some particularly adorable heart-printed underpants. If a player attaches the tool that ends up making his pants fall down, water will spray from the sink and that player is eliminated. The winner of the game is, you guessed it, the only player to not cause the plumber's pants to fall down is the winner.

Part of the appeal of this game is that it can entertain players of all ages. Preschool-age children will get a laugh out of making someone's pants fall down, and hooking the tools onto the belt is easy. At the same time, older players will get a kick out of the adrenaline rush that comes with each impending elimination. Am I the only one whose blood pressure skyrockets during games like Jenga or Crocodile Dentist, when one wrong move unleashes chaos? Plus, everyone loves a game involving water. And parents, don't worry... it's enough water to elicit a few shrieks, but not enough to make a massive mess.

This game isn't the first game that gets laughs with a bit of potty humor. Mattel's Flushin' Frenzy involves fake poo flying out from a toy toilet, while toymaker Daren Worldwide Traders sells Fishing for Floaters, in which players take turns fishing for, yes, poo floaters. And have you heard of Pooparoos, Mattel's plastic figurines that come inside a plastic toilet and (hooray!) really poop? Whether or not you find bathroom humor funny, there is no denying that most kids love this trend. Thankfully, toymakers are giving the children what they want!

Plumber Pants is expected to go on sale Fall 2019, according to a rep from Hasbro. (In other words, it's a potential game to add to your family's arsenal before winter weather hits.) The game is created for two or more players, ages 4 years and up, and will be available for purchase at most major retailers across the country for about $19.99.