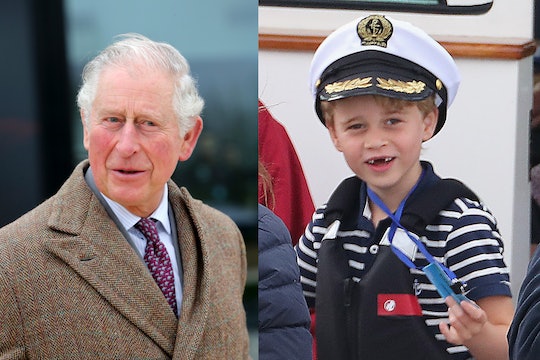 As his grandson's seventh birthday inches closer, Prince Charles hinted that he'd like to take Prince George to the ballet one day, specifically noting that children around his age should be immersed in the arts. That's sweet enough on its own, of course, but he also shared why doing so would be a special experience for him.

Earlier this week, Prince Charles spoke with Classic FM presenter Alan Titchmarsh about his love for classical music, dance, and theater, which started for him when he was around 7 years old. "My grandmother used to play quite a bit of music, so I would hear something there," Prince Charles said. "I suspect the first time I really became aware of it was being taken by my grandmother, Queen Elizabeth I, to Covenant Garden, aged 7, I think. It must have been in 1956 to see the Bolshoi Ballet perform."

Prince Charles has four grandchildren: 6-year-old Prince George; 5-year-old Princess Charlotte; 2-year-old Prince Louis, and 1-year-old Archie Harrison. The proud grandfather told Titchmarsh he thinks "it's so important" for "grandparents or other relations, to take children at about the age of 7 to experience some form of arts in performance."

"I was completely inspired by them," he told Titchmarsh.

Prince George will turn 7 years old on July 22, so it's very possible that Prince Charles could take his oldest grandson to a performance sometime this year when it's safe to do so. Prince Charles, of course, is aware that the ongoing pandemic has paused such outings. "We've got to keep it going. And I keep hoping that, gradually, there will be ways to try to ensure that something can happen," he told Titchmarsh. "But of course, if you can't fill concert halls because of social distancing, it makes it very complicated to know how you present everything and how you survive."

It already seems like Prince George has an early understanding and appreciation for the arts. In 2018, Prince William said that Prince George takes dances lessons and "loves it." What's more, ballet is also part of the extensive curriculum at Prince George's school, Thomas's Battersea in London. So given that he's already a fan, it seems like a theater outing with grandpa would be special for Prince George, too.