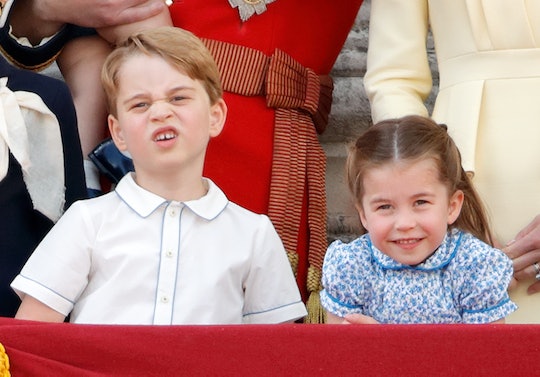 The next time your kids are arguing about utter nonsense, I want you to remember something deeply satisfying. When you're pulling your kids apart and trying to decide whose turn it was to choose which cartoon, please know that somewhere in the United Kingdom the Duchess of Cambridge is doing the exact same thing. Because Prince George and Princess Charlotte apparently squabble over kid stuff just like yours, which means you are basically royal.

Kate Middleton and Prince William are parents to three of the sweetest, most adorable children we all know and love: 6-year-old Prince George, 4-year-old Princess Charlotte, and 1-year-old Prince Louis. The royal kids seem like they are pretty much perfect, always impeccably dressed like characters from a children's book and smiling shyly for the camera. Well, except for all of those time Princess Charlotte stuck her tongue out at people, but even that was just sort of cute and cheeky.

Good news though! According to the podcast Royally Obsessed by Kaitlin Menza and Lisa Ryan, the two older royal kids apparently get into fights just like regular kids. Menza noted in the podcast that Prince George and Princess Charlotte argue over "silly things like toys," although to be fair I bet their toys are next level amazing so they're probably worth fighting over. I'm picturing those little cars that drive themselves and also classics like rocking horses and such.

Menza noted on the podcast that the royal children are pretty much like all siblings and get into fights sometimes, as she had read in a report from Elle magazine, "Charlotte and George apparently argue. It’s usually over silly little things like toys or what TV shows they want to watch."

Ryan sardonically suggested the kids were in a "royal feud," perhaps because the concept of a brother and sister fighting over television and toys is not exactly novel. Princess Charlotte is a longtime Peppa Pig fan while Prince William once said Prince George' favorite movie is How To Train Your Dragon, so you can see how fights might crop up. The podcast went on to point out that a palace source described the children's personalities as very different from each other: "Charlotte is extremely confident and loves attention while George is more reserved, although he is starting to come out of his shell."

That being said, Prince George is apparently a protective older brother who likes to watch out for his little brother and sister... unless they want to watch something on television that he doesn't feel like, perhaps. Then those little royal gloves could come off. If I were him I would use the whole "heir to the throne" thing to get my way, but I suspect Prince George is already more mature than that.