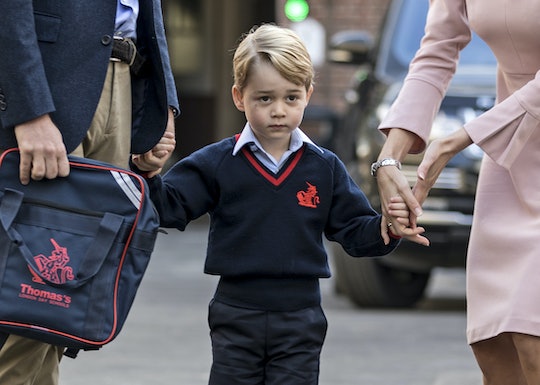 Now that school is back in session for the royal kids, Kate Middleton recently shared that Prince George is really loving an exciting subject at school. And, let's just say, it sounds like way more fun than the regular classroom fare like math, reading, and writing.

This month, the 7-year-old son of the Duke and Duchess of Cambridge headed back to school with his 5-year-old sister Princess Charlotte. The two royal kids attend Thomas's Battersea School in London, not far from their home at Kensington Palace. The royal kids had been doing distance learning at their family's country home of Anmer Hall throughout the spring due to the coronavirus pandemic and now that they're back, it sounds like Prince George already has a preferred topic of study. Volcanoes.

Middleton reportedly spoke to Ceri Edwards from South Wales recently, a fellow mom who had submitted a photo of her daughter for the Duchess of Cambridge's "Hold Still" photo campaign, which she launched as a way of capturing acts of human kindness throughout the coronavirus lockdown. Edwards told Hello! Magazine that she and Middleton bonded over their kids, who are around the same age.

"The Duchess was so down-to-earth and was so wonderful with Poppy," Edwards told the magazine. "We talked about Poppy and Prince George being in the same school year and their current school topics [Poppy's is Brazil and Beyond and George's is The Active World — Volcanoes]."

To give Prince George credit, volcanoes are a pretty fascinating subject to study. And it's sort of amazing that he is being given the opportunity to look at volcanology when he's just 7 years old.

Prince George's interest in volcanoes is certainly in keeping with his fascination with the natural world. According to his mom, Prince George is a fan of famed nature documentarian David Attenborough's series The Blue Planet. When the future king recently met Attenborough during a screening of his new film A Life On Our Planet at Kensington Palace, Prince George looked delighted to receive the gift of a fossilized tooth from a giant shark. Attenborough told The Sunday Times that Prince George seemed to be a big fan of his new gift, asking all sorts of questions like "What it was? How big it was? And so on. He was certainly very interested. He seemed to like it. He is very interested in fossils. [Charlotte] was too."

Fossils and volcanoes. It sounds like the young prince, who comes from a long line of conservationists in the royal family, may turn out to be a little explorer when he grows up.