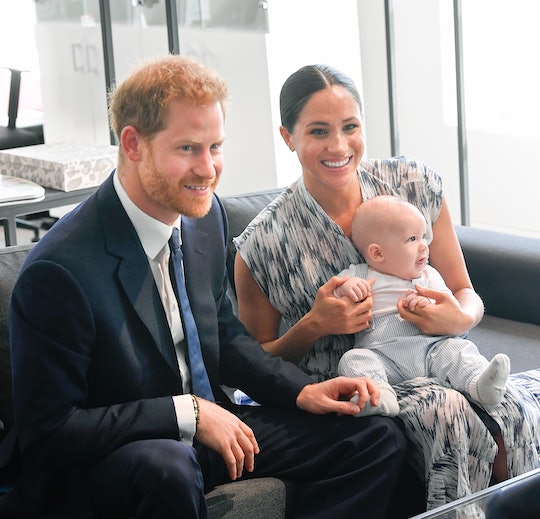 There is no question that becoming a parent has changed the Duke of Sussex. Through his quotes about climate change and beyond, it's evident that parenthood has made him more focused on the world he wants to help create for his son. And once again he is taking active steps towards helping to create that world. In a recent essay for Fast Company, Prince Harry shared why social media has him concerned specifically "as a father" and he does an admirable job of pleading his case to make the internet a safe place where platforms "redesign themselves in a more responsible and compassionate way."

Prince Harry and Meghan Markle welcomed their son Archie Harrison Mountbatten-Windsor in May 2019, and since then their world has changed immeasurably. In part due to the birth of their son, of course, but also in large part due to the constant media attention and criticism they received as senior members of the royal family. In January, they made the landmark decision to step back from their senior royal roles and move towards financial independence. Since then, the Sussex family has moved to Los Angeles and live private lives for the most part, although they both remain dedicated to their philanthropic causes. Like sharing an impassioned plea for redesigning social media to make it less divisive for the next generation.

In an essay for Fast Company entitled "Social media is dividing us. Together, we can redesign it," Prince Harry outlined how social media has divided people through and noted that "if we are susceptible to the coercive forces in digital spaces, then we have to ask ourselves — what does this mean for our children?" The worried dad went on to say, "As a father, this is especially concerning to me."

As he mentions in his essay, Prince Harry and Markle have both been supporters of the #StopHateForProfit campaign, which encourages companies like Facebook to withhold advertising dollars on platforms where hate speech remains unchecked. The Duke of Sussex wrote about the need for change in his essay, writing that "we have an opportunity to do better and remake the digital world, to look at the past and use it to inform the future."

"We must take a critical eye to the last two decades, where advancements in technology and media have outgrown many of the antiquated guardrails that once ensured they were being designed and used appropriately," Prince Harry continued. "It shouldn’t be seen as a coincidence that the rise of social media has been matched by a rise in division amongst us globally. Social media’s own algorithms and recommendation tools can drive people down paths toward radicalism and extremism that they might not have taken otherwise."

Ultimately, Prince Harry called for "meaningful digital reform" in his essay. "We can — and must — encourage these platforms to redesign themselves in a more responsible and compassionate way. The world will feel it, and we will all benefit from it," his essay for Fast Company concluded.

This isn't the first time Prince Harry has spoken out about his concerns for Archie's future. In June, for instance, he wrote a letter to African Parks about his renewed investment in conserving the environment. "Since becoming a father, I feel the pressure is even greater to ensure we can give our children the future they deserve, a future that hasn’t been taken from them, and a future full of possibility and opportunity," his letter read.

And, of course, when he and Markle decided to step away from their royal roles, Archie's future was a part of that decision. His longtime friend Nacho Figueras explained Prince Harry's feelings at the time in ABC's documentary, Royal Divide, Harry, Meghan and the Crown, saying: "He's being a father... a guy who is trying to protect his cub and his lioness from whatever it takes."

More Like This
This Tense Moment Between William & Harry From A Resurfaced Interview Is Going Viral
Prince Harry Says He’s Worried One Of Prince William’s Kids Will End Up As “The Spare”
Marie Kondo Gives Up Tidying Post-Kids, Sparking Joy For Moms Everywhere
Keke Palmer Casually Drops Her Baby's Sex On Jimmy Fallon
What Parents Are Talking About — Delivered Straight To Your Inbox