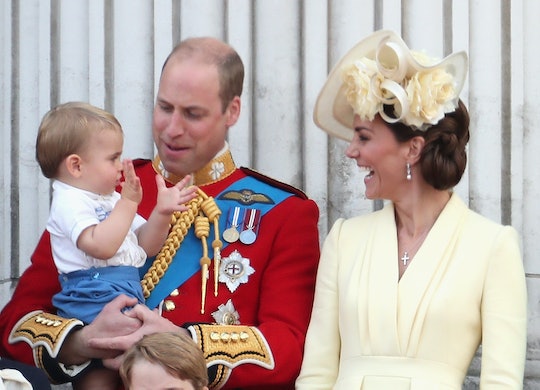 The United Kingdom (and the rest of the world, TBH) celebrated the Queen's birthday over the weekend, a public event that also allowed little Prince Louis of Cambridge to make his public debut as an official member of the royal family, who's expected to smile and wave to the crowd. Since that might be a bit of pressure for a tot, it's not really surprising that 1-year-old Prince Louis was seen sucking his thumb. It's pretty common habit used by babies to self-soothe and, more importantly, it was the perhaps cutest thing to happen that day.

This past weekend's Trooping the Colour parade marked the first time the youngest of Kate Middleton and Prince William's three adorable heirs to the throne of England, 14-month-old Prince Louis, attended the annual event, according to Hello! Magazine. Meanwhile, big sis, 4-year-old Princess Charlotte first hit the much-publicized event at 13 months old, while big bro Prince George, now 5, was almost 2 years old before he appeared publicly at the event, as Hello! Magazine reported.

Although the royal event has always been a big deal across the pond, it seems like the the annual Trooping the Colour has been more noticeable to American fans, such as myself, with the arrival of the next generation of royals. Last year, the junior royals, including the Cambridge children and their royal cousin Savannah Phillips, took center-stage for their regular-kid mischief trying to keep themselves occupied during the festivities.

But this year, it was Prince Louis who totally stole the show as he was seen sucking on his thumb as the festivities went on, according to The Sun.

The 1-year-old royal cutie, who recently got to help his mom debut one of her new nonprofit projects, an urban garden, keeps showing off his adorable milestones, such as walking, and his sweet toddler behavior.

Indeed, a common behavior for children this age is to self-soothe with a finger, such as thumb, in the mouth, which Parents noted can be associated with the comfort a child remembers from sucking on his bottle. And as Parents added, while that sounds innocent enough, once a habit like thumb-sucking has begun, it can also be pretty tough to break.

With this knowledge in mind, it help may explain why Prince Louis' folks were also seen gently prying the young prince away from those delicious digits. As PopSugar reported and as you can see in the photos below, Middleton was spotted simply correcting the behavior without any shaming. And after that, Louis then started waving and clapping again.

While the royals are so visible in the world that every single thing they do causes a reaction, this also means that Twitter was full of whether it was good/bad, right/wrong to try to dissuade the thumb-sucking, which is, after all, extremely common in toddlers.

At the end of the day, it seems fair to agree that Prince Louis didn't look offended when his mom gently took his thumb out of his mouth. And, personally, I like knowing that someone who has ample resources at her disposal (including vintage designer hand-me-downs from her husband's side) is also seen juggling real-world parenting stuff, like a thumb-sucking 1-year-old.