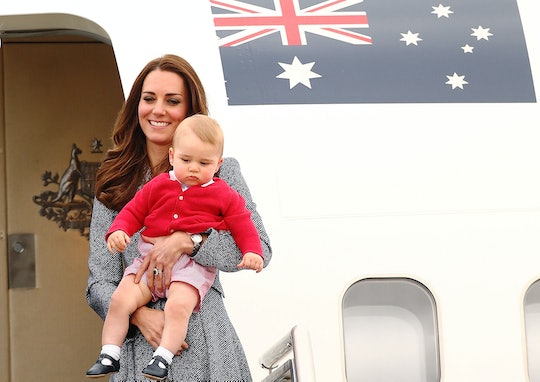 The Duchess of Cambridge has made a name for herself for a few reasons. First, there are all of her charitable works in an effort to raise mental health awareness. On a rather less cerebral note, she also has excellent hair, a husband who is going to be king, and three adorable kids. And let's not forget that she is a thrifty fashion queen. Not only does she recycle her own outfits with ease, Kate Middleton has an eye for recycling key pieces in her kids' wardrobes as well. Like just this week when Prince Louis wore Prince George's hand-me-downs and looked incredibly adorable.

The entire Cambridge family — including Prince William, 5-year-old Prince George, 4-year-old Princess Charlotte, and 1-year-old Prince Louis — were on hand on Sunday to enjoy a garden Middleton designed for the Chelsea Flower Show. It was a pretty special event considering how rarely we get to see the entire family of five out together, but obviously everyone was mostly in it to see the royal kids.

We got to hear Princess Charlotte exclaim "Ooh la la!" over the Back to Nature-themed garden and Prince George grade his mother's efforts a 20 out of 10, as Vogue noted. And, finally, to see little Prince Louis actually toddling around in red shorts and a cardigan.

While most of the world might have been focused on Prince Louis' cherubic little cheeks and smile, eagle-eyed royal watchers were paying close attention to his outfit. Or more specifically, his shorts. Which, as Travel + Leisure reported, looked suspiciously identical to the same shorts his brother wore back in 2014 when he traveled with his parents to Australia.

Here is Prince George looking less than impressed in his mother's arms... in the same little jumper Prince Louis was recently photographed wearing, according to Entertainment Tonight.

This isn't the first time the Duke and Duchess of Cambridge have handed down clothes from their oldest child. It's not even the first time we've seen Prince Louis in hand-me-downs.

When the young royal was christened last July at St. George's Chapel in Windsor Castle, he wore the same christening gown both his brother and sister had worn before him, according to People.

And can we all just say kudos to whoever is doing that laundry. Whites are hard enough but white baby clothes? Next level.

Kate Middleton is such a dab hand at recycling kids clothes, in fact, that, as The Telegraph previously reported, Prince George has even been spotted wearing his dad's old clothes.

Like at Princess Charlotte's christening in 2015 when Prince George wore the same red and white shorts ensemble his father wore when he met his brother Prince Harry for the first time, according to Grazia.

I really love this whole hand-me-down vibe Kate Middleton is serving with her kids. First of all, all of their clothes are classics so it's not like they can't be passed around. Second of all, I can't help but hope that the clothes will be handed down to the royal cousin Archie, Meghan Markle and Prince Harry's baby boy, one of these days. They can just go on and on.

More Like This
Prince William & Kate Middleton Met A Little Boy Dressed As British Guard
Elon Musk Shares New Photos Of Son, X, With His Own Twitter Badge
Mariah Carey Says She Has Never Called Herself The “Queen Of Christmas”
Jodie Turner-Smith Opens Up About Being Secretly Married & Pregnant