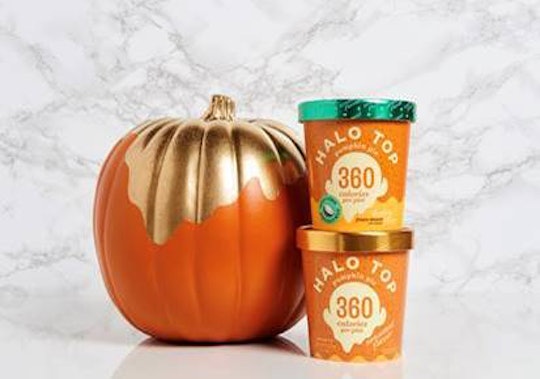 Stop What You're Doing: Pumpkin Pie Halo Top Is Coming Back

The temperature just dropped about five degrees in Georgia the last two days, and I am all about it. Not only do I have chili in the crockpot as I write this, but this news me super excited for pumpkin season. For someone who absolutely hates pumpkin guts to the point I won’t carve a pumpkin, I do love me some pumpkin pie and pumpkin spice. So I’m super excited that everyone’s favorite low-calorie ice cream is bringing Halo Top Pumpkin Pie back. And not only that, but Halo Top is (pumpkin) spicing it up with a new vegan non-dairy version of this delicious flavor.

Unfortunately I won’t be able to enjoy a Halo Top Pumpkin Pie dessert after my chili tonight since it won’t be released until early September, but when it does, you better believe I will soon be enjoying it. There are even real pieces of pumpkin pie crust in the pumpkin-spice-infused ice cream. Is anyone else’s mouth watering?

So what makes Halo so amazing? Not only is there a great source of protein in each serving of ice cream — with a whopping 20g in the Pumpkin Pie version — but each pint contains around 280 to 360 calories. So you can satisfy that sweet tooth without the extra calories while pumping up the protein. Plus they’re just so delicious, I don’t even care about the calories to be honest. I mean have you tried their Birthday Cake flavor? There are 44 different flavors after all — more than Baskin Robbins if you can believe it. There’s a reason this ice cream was named one of Time Magazine’s “25 Best Inventions of 2017.”

Oh, and the new vegan version is made with yummy coconut milk and will still pack 12 grams of protein for you while still being 360 calories. All of that protein and still cruelty-free? Sounds like a pretty amazing win-win.

Since we all know fall is officially the season for pumpkin-flavored everything (at least it is for me) like carving, pies, or spice — I’m sure this Halo Top Pumpkin Pie ice cream will be gone just as quickly as they are placed on the shelves. Thankfully, you can find both the regular Halo Top Pumpkin Pie ice cream and the dairy-free version at retailers nationwide, so be on the lookout come early September. I mean, honestly, the real bonus is to have a cold fall-themed tasty treat since it's often still pretty hot once that first day of fall rolls around.

And to truly get your pumpkin on this fall, don't forget that the official Starbucks PSL creamer is now in grocery stores nationwide, along with plenty of other autumn-flavored treats. Hello, have you heard about the Starbucks pumpkin cream cold brew? More cold pumpkin-flavored things for the end of summer please. Also, like I said, even though I despise pumpkin innards, I do love this Halo Top Pumpkin Pie ice cream. So if it can convert me, imagine what a true pumpkin lover will think about this.