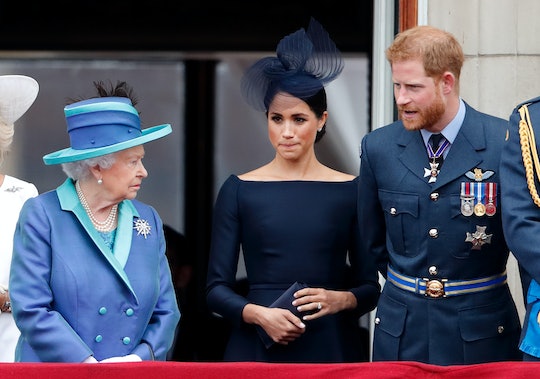 "These Are Complicated Issues": Palace Speaks Out After Meghan & Harry's Announcement

It seems royal watchers weren't the only ones who might have been taken by surprise when the Duke and Duchess of Sussex announced that they were planning to take a step back from their senior royal roles. The Queen even issued a statement about Meghan Markle and Prince Harry's announcement, which stressed that discussions with them on the matter are at "an early stage." What's more, various reports suggest she and other members of the royal family were not notified ahead of time.

Markle and Prince Harry made an unprecedented announcement on their Sussex Royal Instagram account that outlined their plans to step back from their "royal senior roles" in 2020. They also wrote that they plan to "work to become financially independent, while continuing to fully support Her Majesty The Queen." Not only are they working towards financial independence from the royal family, they are also planning to divide their time between the United Kingdom and North America to give their 8-month-old son Archie a more balanced life.

This surprising announcement came after the couple spent six weeks of holidays on the west coast of Canada instead of spending Christmas at Queen Elizabeth's Sandringham Estate, as they did last year. While their decision not to spend the holidays with the Queen and the rest of the royal family was done with her consent, that doesn't appear to be the case with this new announcement.

On Wednesday, Buckingham Palace released a statement regarding the Sussex family's announcement that said almost nothing and a whole lot at the same time.

"Discussions with the Duke and Duchess of Sussex are at an early stage. We understand their desire to take a different approach, but these are complicated issues that will take time to work through," Buckingham Palace, the office of the Queen, wrote in a statement issued to reporters, as royal correspondent Omid Scobie shared on Twitter.

The BBC reported that the Queen was not notified about Markle and Prince Harry's decision ahead of their announcement, which could be one of the reasons Buckingham Palace's response was so short.

It should be noted that the royal family has been criticized in the past for not publicly supporting Markle and Prince Harry as the couple were being attacked by the British tabloids practically on a daily basis, as Entertainment Tonight reported. The couple have been openly struggling in their roles as senior royals for some months, even opening up during an ITV documentary called Harry and Meghan: An African Journey about their struggles with the strictures of palace life.

In the past two years, Markle has attempted to assimilate into the rigid traditions of the royal family, something she admitted during the documentary she didn't fully "understand" would include so much negativity from the British press. At the same time, the former American actress and philanthropist has tried to find her way as a new mom and a new wife.

Then there's Prince Harry, who has had his own difficulties with the royal family. Since his mother's death in Paris in 1997 when he was just 12 years old, he has had an ambivalent relationship with the press and their treatment of his family. It probably shouldn't come as a surprise that Prince Harry might not want his wife and child to suffer at the hands of the tabloids the way his mother did in her lifetime.

When all of the shock settles, perhaps Buckingham Palace will be able to find a way to accommodate the Duke and Duchess of Sussex and their plans to build an independent life for themselves.