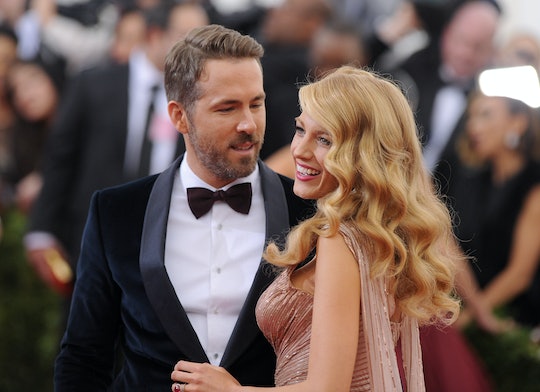 If quick-witted social media banter is an indication of a happy marriage, I think I know who the happiest couple in Hollywood might be. Sure, Ryan Reynolds' response to Blake Lively's "pregnant" comment on his Instagram post might give the wrong impression at first glance, but if you've been following the couple's banter through the years you'll know it's just par for the course.

On Wednesday, the Deadpool actor shared a clip from his 2010 movie Buried, which is now streaming on Hulu. The psychological thriller saw Reynolds playing a contractor who is buried alive in a wooden coffin with a lighter, flask, flashlight, knife, glow sticks, pen, pencil, and a cell phone. In the clip Reynolds shared, he is taking a long drink from the flask emblazoned with the Aviaton gin logo, coincidentally a company the actor now co-owns.

"Before Deadpool, I was an actor," he captioned the video. "One of my favorite projects was a film called 'Buried' and it’s now on @Hulu. 10 years later, it really holds up! Although I don’t recall the aggressive product placement."

The clip of Reynolds looking all scruffy and sweaty and taking a drink from a flask was perhaps just a little bit sexy, and it apparently brought up some feelings in his wife.

Lively commented on Reynolds' post: "I think this just got me pregnant."

Now, keep in mind the couple are parents to three girls, 6-year-old James, 3-year-old Inez, and another baby girl born last fall whose name they have not shared yet. So you can perhaps forgive Reynolds for his response to Lively's comment.

"I will be out of the office starting July 22nd through the middle of forever and ever," he wrote. "If you need my immediate assistance during my absence, please contact someone. Anyone. Otherwise I will respond to your message as soon as possible upon my unlikely return. Thank you."

The couple, who tied the knot in 2012, have a long and illustrious history of trolling each other on social media. Whether Reynolds is wishing his wife a happy birthday by sharing a photo of himself and cropping her out, or she is responding with a birthday photo for him that is actually Ryan Gosling, they're always having fun.

Besides, you can't tell me Ryan Reynolds wasn't a little bit flattered by his wife's thirsty comment.