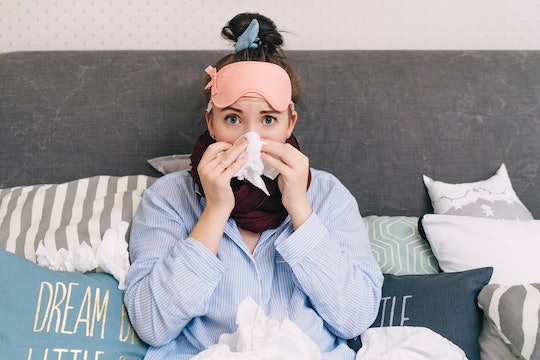 Yesterday, for the first time in a long time, I had a nice sick day. Don't get me wrong, I was sick so the coughing and the whole "feeling like crap" thing wasn't great, but I was also able to actually lie down on my couch and take a break from regular life (which can be nice even when you're not feeling 100 percent). Now that my kids are almost 5 and solidly 7, I'm able to occasionally rest when I need to. But sick days when you're a mom with young children? That's basically a heretofore unimagined level of hell that I would not wish on my worst enemy. Okay, maybe my worst enemy.

One of the coolest things about being a parent is that it's a totally immersive, 24 hours a day, seven days a week experience. And because it's so enveloping the love you feel for your little ones, and the joyful highs that come along with it, are elevated. But it also means you're running on fumes for at least the first several years of your kid's life, because you're basically, and constantly, managing life for at least two people. And managing someone else's life when you're trying to, like, not die of plague? Well, it sucks. It sucks so bad.

To show you just how terrifically awful this (let's face it) common experience is, allow me to present a sick day without kids versus one with them thrown into the mix.