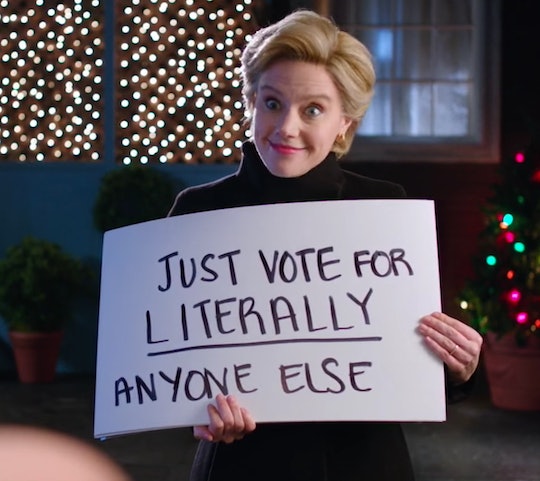 Less than 48 hours before the Electoral College will more than likely confirm the election of Donald Trump as the next president of the United States, Hillary Clinton made her last, desperate case for the country to please, please reconsider. At least, that was the mission of Kate McKinnon's impression of the defeated Democratic candidate in Saturday Night Live's resurrection of an iconic scene from the 2003 Christmas classic Love Actually, this time with an everything's-at-stake twist. In tugging at the heartstrings of a battered progressive America, SNL's Hillary Clinton Love Actually skit depicts her as a selfless (if still a tad out of touch) crusader dedicated to delivering the nation from the destruction many are sure a Trump presidency will inflict, confessing her love for democracy like Andrew Lincoln's character woos Keira Knightley's in the quintessential Christmas movie.

Just as in Love Actually, McKinnon's Clinton shows up unexpectedly at the front door of the person she intends to convince. Instead of the frivolous-by-comparison "To me you are perfect" of the lovestruck Lincoln, Clinton has prepared a more urgent message written on poster board for the member of the 2016 Electoral College before her: Don't cast your vote for Donald Trump Dec. 19.

"Listen, I know I lost the election and we may never know why **cough** Russia **cough**," read the series of well-argued statements Clinton shows to the elector, in a spot-on parody of the Love Actually scene in which Lincoln's character confesses his love to Knightley's newly married one, with her unwitting husband inside the house. "But I still care about this country. You don't even have to vote for me. I'm coo. Just vote for literally anyone else. Like, John Kasich, Tom Hanks, Zandaya, The Rock, a rock."

The increasingly far-fetched suggested alternatives reflect the Hail Mary-esque real-life efforts of some electors to commandeer the Electoral College's meeting Monday and, against all odds, prevent the man they believe is unqualified and unfit for the Untied States' top job from actually taking office next month. The Hamilton Electors' reasons for working to convince their colleagues to go "faithless" and cast their votes for someone other than the person the people of the states they represent cast their ballots for on Election Day also mirror McKinnon-as-Clinton's: Trump's refusal to attend security briefings, his early and reckless provocation of China, the "anti-gay," "anti-environment," and "anti-woman" (not to mention racist) stances of many of his Cabinet picks, and the unprecedented, global conflicts of interest his business empire represents.

After a brief mix-up in which McKinnon's Clinton confuses an oft-repeated line from the 2011 film The Help and confesses that she has never actually seen a movie, she presents her clincher: "Anyway, enjoy your holidays. But keep in mind, if Donald Trump becomes president, he will kill us all."

It seems like hyperbole, but those who are concerned that such a bombastic, unpredictable, and vindictive man will soon have control of the nuclear codes may argue that it's not wholly a laughing matter. Because, as SNL's Clinton tells the elector, "He cray." That's why he can't actually end up in the Oval Office... but the elector in the skit is noncommittal, smiling along enthusiastically with the former secretary of state but ultimately closing the door with a friendly wave without pledging to alter her vote. It's a deviation from the end of the Love Actually scene, in which Knightley chases Lincoln down the street to kiss him.

But, at the end of the day, the Electoral College's work exists in reality, not a romantic comedy. And as was in the case in throughout the election season, the tactic of employing reason and logic may not triumph.