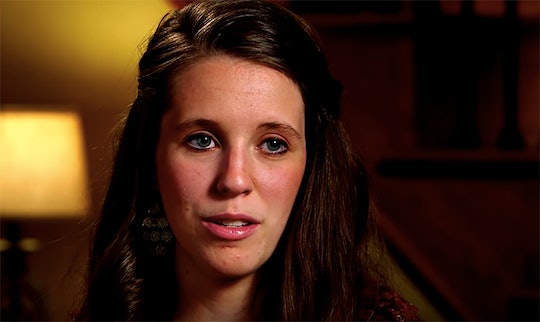 Unfortunately, some fans feel comfortable criticizing the children of public figures. It's an upsetting trend, to say the least, especially since most of the backlash is completely ridiculous and unfounded. Want proof? Look no further than these comments from fans who believe Jill Duggar's young sons are too pale. Apparently, some Counting On fans think the children's so-called paleness is an indication that they're not healthy. Cue the eye rolls.

It's no secret that plenty of people aren't fans of Duggar and her controversial husband, Derick Dillard. The couple tends to ruffle a lot of feathers these days (rightfully so, I might add), and it's not uncommon for people to express their frustration with their offensive antics on social media. From people calling out Dillard's transphobic comments against reality television star, Jazz Jennings, to others taking Duggar to task for some questionable parenting advice, most of the criticism directed at the two are warranted.

On the other hand, however, a lot of the backlash against Duggar and Dillard is completely unnecessary. And sadly, some of the misguided attacks are directed at the couple's two young sons — Israel, 3, and Samuel, 10 months. Case in point: On Monday, people took to Jill's Instagram page to comment that Israel and Samuel are supposedly too pale.

The conversation about the boys' coloring kicked off after Duggar posted a sweet family photo to Instagram.

"Am I the only one who thinks these children look malnourished? It's like they've never seen the sun...," one person commented, according to Instagram.

"You’re definitely not the only one. Israel is so pale," another fan responded.

Another person chimed in: "Not the only one, they don’t look malnourished but so pale! No one is saying let them get sunburnt but if they spend time outdoors playing with sunscreen on they will have a nice healthy colour. Babies are usually chubby even with thin parents, this one is quite skinny where Israel was nice & chubby..."

Besides the fact that it's never OK to post negative comments about a child's looks, it's important to recognize that these remarks don't make any sense.

First off, you can't tell if a child is malnourished by one picture. A trusted health professional should be the one to make this determination. Additionally, there are symptoms a person can look out for if they suspect if a child is malnourished. Some symptoms include, according to Kid's Health: "fatigue (tiredness) and low energy, dizziness poor immune function (which can harm the body's ability to fight off infections), dry, scaly skin, swollen and bleeding gums, and decaying teeth." How can fans accurately tell if Israel or Samuel are suffering from any of these ailments?

Furthermore, paleness is not necessarily an indication of poor health. Although paleness can indicate an iron deficiency or poor circulation, most of the time people are just naturally pale. And during the winter months, people typically appear paler due to a lack of sun exposure. People who are diligent about sunscreen can also appear paler than others.

Not to mention, Duggar's kids do go outside often. Just five days ago, Duggar shared a photo of Israel enjoying a smoothie in the sun. "It’s a beautiful day for a smoothie outside! How’s the weather where you are?" Duggar captioned the shot, according to Instagram.

Luckily, others are on board with the fact these comments are out of line.

"I’ve been pale my whole life and I’m was never malnourished," one person wrote. "No need to be rude about the color of their skin. Also no need for a baby to be out in the sun long enough to get a tan."

Another supporter added: "Some kids are just naturally thin and fair skinned. When I was a kid I ate everything in site. I wasn't very picky. And I was outside ALL the time. I was just naturally pale. It happens."

"They don’t look malnourished and some people are just naturally fair skinned," someone else penned.

To sum all of this nonsense up, fans should probably think twice before they unfairly criticize a stranger and their children. Making snap judgements about another person's health or parenting is not only irresponsible, but is has the potential to hurt others.