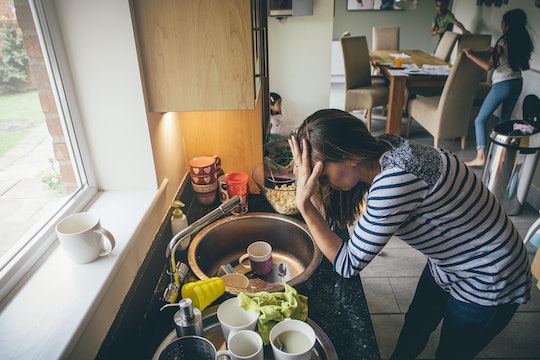 When my daughter was 2-years-old my then-husband got a job out of town. Four days a week he'd leave before sunrise and not return until hours after bedtime. I worked full-time, too, which meant my days were long, hard, and exhausting. I found myself complaining to my friends that I was a single mom. I mean, felt like I was when I had to parent by myself the majority of the time. Then I actually became a single mom, and I realized just how messed up it is to call yourself a single mom because your partner works long hours or has to travel for work.

Please don’t misunderstand me, because I get how hard it is to be a parent, regardless of your circumstances and especially when you feel like you have to do everything by yourself. Personally, it was so overwhelming, and at times seemed pretty impossible, to manage parenting a toddler solo the majority of the week. But if your partner works long hours, over-time, has to spend some time out of town, or if they aren’t a very engaged parent when they are home, make no mistake: that doesn't make you a single mom. And when you say you are, or imply that your situation is the same as that of a single parent, it's both inaccurate and more than a little bit offensive.

Make no mistake, all moms need and deserve support, and that sometimes requires venting about your partner or their absence to your friends. But I also I totally think it's possible to do so without minimizing other peoples' struggles in the process. I know firsthand that co-parenting with an absent partner is difficult, but now that I've been a single parent, too, I can also say with 100 percent certainty that it's not the same as parenting without a partner.

After going through that experience, and surviving, and then getting re-married, I will never again compare the two, even when my husband has to work late, is out-of-town, or gone on the weekend. There’s no comparison, honestly.

I will say that I absolutely felt like a single mom before I left my ex. Then I left my husband and realized that I had no idea what "hard" really was. In reality, single parenting was pretty much the most difficult (and, at times, the best) thing I've ever done. After going through that experience, and surviving, and then getting re-married, I will never again compare the two, even when my husband has to work late, is out-of-town, or gone on the weekend. There’s no comparison, honestly.

Now, I’m not saying that being married to my now ex-husband was easy. I know how hard it can be to co-parent with a partner who is never there. In many ways leaving him was the best thing I could do for myself and my kids. Becoming a single mom made me a better parent, and on my own I was able to be the type of mom that I wanted to be. Once I became a single mom, though, I was it. I was all my children had. I was on call every hour of every day. I had to be on 24/7 with very few breaks and, more often than not, without another adult available to weigh in, even over the phone or after bedtime. I also learned that people judge the hell out of single moms, and act like there is something inherently wrong with us that has made it impossible for someone else to parent by our side. To say that notion is messed up is a serious understatement.

When I recommend that tired moms, whose partners work long hours, stop co-opting single moms experiences, let’s just say that I know what I’m talking about.

As much as I hated co-parenting with my ex, when we were married I could at least count on him financially, occasional emotional support, and parenting back-up when I needed it. If I wanted to go for a run in the morning, go out for drinks after work, or sleep in on the weekend, it was rare but possible. After I left him, though, those options disappeared entirely. When my "parenting partner" had to work out of town overnight it was overwhelming, for sure, but nowhere near as overwhelming as being a single parent, managing everything from sunup to sunrise and being the only one answering wake ups in the middle of the night.

Single parenthood is hard. Full stop. It’s the hardest thing I’ve ever done, and I honestly hope I never have to do it again. So when I recommend that tired moms, whose partners work long hours, stop co-opting single moms experiences, let’s just say that I know what I’m talking about. If you want to vent or need support, I'm here, but please, please stop calling yourself a single mom. You're not.

More Like This
17 Best Potty Training Products For Toddlers
From Captions To Gifts, These Are All The Kindergarten Graduation Ideas You Need
These High School Graduation Speeches Will Give You Hope For Our Future
Ashley Graham On The “Fun, Organized Chaos” Of Raising Twins