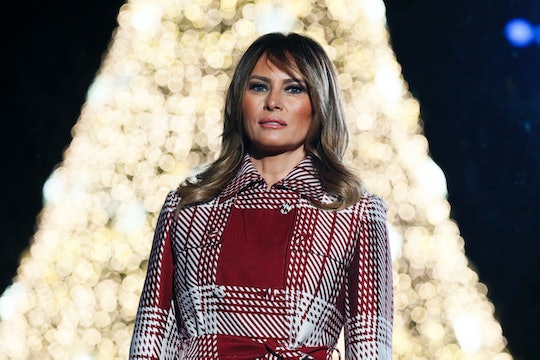 After reported recordings from the summer of 2018 were released on Thursday night, First Lady Melania Trump's comments on child separation are coming under fire.

The First Lady reportedly expressed her feelings about the separation of migrant children at the U.S.-Mexico border to former friend, senior advisor, and author of the book Melania and Me, Stephanie Winston Wolkoff — who secretly recorded the conversations. The tapes were released on Thursday to CNN. These conversations, which are reportedly two years old, also cover topics including the First Lady's apparent frustrations about having to focus on decorating the White House for Christmas while the conversations about child separation were taking place.

"OK, and then I do it, and I say that I'm working on Christmas and planning for Christmas, and they said 'Oh, what about the children that were separated?' Give me a f***ing break."

"They say I'm complicit," the First Lady said on the recording. "I'm the same like him, I support him. I don't say enough I don't do enough where I am."

The First Lady also spoke about the accommodations provided for the children at the border.

"The kids, they say, 'Wow, I will have my own bed? I will sleep on the bed? I will have a cabinet for my clothes?'," she can be heard saying in the tapes. "It's so sad to hear it, but they did not have it in their own countries, they sleep on the floor. They are taken care of nicely there. But, you know, yeah, they are not with parents, it's sad. But when they come here alone or with coyotes or illegally, you know, you need to do something."

The First Lady's description of these accommodations is a stark contrast to firsthand reports. The Trump administration has separated immigrant children from their families under a "zero-tolerance policy." Under this policy, undocumented immigrants are prosecuted for illegal entry into the United States, taken into custody, and often separated from their children. These children might find themselves in detention centers under the supervision of the Department of Health and Human Services, according to Vox, where they are separated by age and sex, according to U.S. News & World Report. These facilities are not glamorous. They're often cramped, according to TIME, with some children even having to sleep on the floor and not given access to adequate nutrition, according to NPR.

Stephanie Grisham, the first lady's press secretary, told USA Today that Wolkoff's secret recordings were an attempt to "peddle herself" and her book. "There is no way to know if these recordings have been edited and it's clear the clips were hand-picked and presented with no context," Grisham said in a statement. "The first lady remains focused on her family and serving our country."

The White House did not immediately return Romper's request for comment.

Democratic presidential nominee, Joe Biden, has said that he will put an end to prosecuting parents for minor immigration violations and reunite any separated families, according to Reuters. His running mate, Kamala Harris, has also vowed to release separated children and get rid of private detention centers.

The first lady released a rare statement about families being separated the same summer that these conversations reportedly took place. It was that same summer when she also wore a jacket that read "I Really Don't Care, Do U?" written across the back on a trip to visit facilities housing immigrant children.

"Mrs. Trump hates to see children separated from their families and hopes both sides of the aisle can finally come together to achieve successful immigration reform," Grisham told CNN in June 2018.