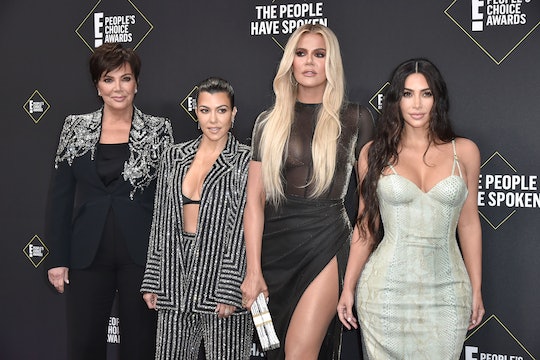 The KarJenner family has put together creative and often over-the-top Christmas cards since the early 90s. They highlight an organized effort to get all of the kids, along with their own little ones, in fun matching outfits with a festive backdrop. But it sounds like an epic, jaw-dropping Kardashian Christmas card isn't on the agenda this year.

Kim Kardashian told E! News that her siblings — Kourtney and Khloé — and their kids won't be coming together for a new photo shoot this year. Instead, she will just release her own Christmas card with her husband, Kanye West, and their four kids: daughters, North and Chicago, and sons, Saint and Psalm. "I think this Christmas card will just be my family, like, me, Kanye, and the kids, because it's a lot to wrangle everybody," she told E! News.

And instead of a glamorous shoot, Kardashian said that fans can expect something "really chill and cozy" this year. The 2018 Kardashian Christmas card gave off these similar cozy vibes, featuring just the KarJenner sisters (minus Kendall) and their kids dressed in white.

Some diehard KUWTK fans might have expected a low-key Christmas card this year. After all, the Kardashians have been teasing this for a while. Throughout the years, the family has skipped cards, like in 2016 after Kim was robbed in Paris, as HuffPost noted. But a year later, the family came back in full force, releasing 25 different photos throughout December leading up until Christmas. Kylie Jenner, who was pregnant at the time (and keeping it a secret), was noticeably absent from these cards.

Although they did a big Christmas card last year, Kim admitted in 2018 that organizing the Christmas card photo shoots has been getting harder and harder. "Kris Jenner has given up," she told E! News at the time. "She just is like, 'I don't have the energy to wrangle all my kids anymore, and their kids.'" But they were still able to get all of the Kardashian grandbabies together for one awesome photo.

Judging from what Kim has said, it seems like separate family Christmas cards are perhaps in the works this year.