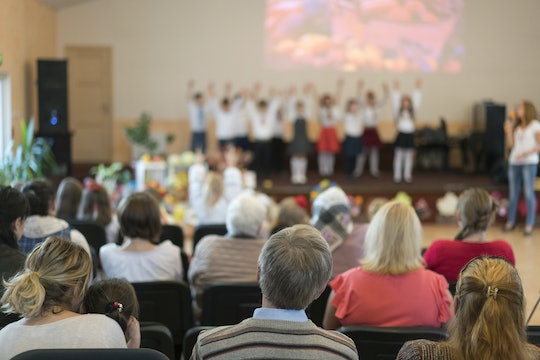 The Devastating Way Schools Are Discriminating Against Working Moms

Last week, I was faced with the frustrating reality of being a parent who works full-time outside of the house. Once again, I was reminded that even schools discriminate against working moms. I felt inadequate, guilty, and exasperated over having to choose my children over my job. A choice, by the way, that does not come easy to many moms. You see, every winter our daycare puts on a winter recital. My son, and my daughter when she was that age, rehearses for months. Poems are sent home for practice and memorization. My son sings the songs he is taught during car rides to and from daycare. He excitedly tells me Santa Claus will be coming right after his performance. He also assumes his parents will be there to witness his performance, since that's what his school tells him.

A few days ago, when I came to pick him up, I saw the sign in the hallway: "Winter Recital, December 20th, at 9:30 a.m." It didn't take me long to process the gravity of this situation: I would be missing this performance. This isn't the first school event I have missed, either. In fact, I miss pretty much all of them. Still, something about this one in particular affected me in a profound way. It struck me to my core, because I know my son has been loyally preparing. He's been consistently practicing. He's been unapologetically excited. I mean, I've seen the joy in his eyes as he recited the poems.

I do it with constant guilt that burrows into my every fiber and eats at me relentlessly.

How could I miss this recital? And perhaps more importantly, why do I have to? I'm a teacher, and my schedule isn't all that flexible, but I shouldn't be punished for continuing to be a reliable employee after I decided to become a mother. Plus, every time I take a day off work, I create work for someone else. And my allotted PTO is limited to only a few days per school year, so requesting time off isn't simple. But I can't explain all this to an excited child who just wants to perform in front of his parents. I wouldn't even know where to start.

Frustrated and defeated, I took my rant to Facebook, hoping other, perhaps more rational moms would calm me down and/or validate my feelings. From my post I learned one thing: mothers I know have accepted the fact that the system works against them. They have accepted that not only America's corporate culture doesn't value families, but even schools make it difficult for parents to be a true part of their kids' lives. They have accepted the discrimination and the inevitable defeat that goes along with it. They have waved the white flag and shrugged their shoulders with a dismissive, "Well, what can you do?"

"Ask someone to videotape it for you," one mom replied.

"Story of my life," another one conceded.

It's not a surprise mothers are still doing the majority of the housework and childcare while working full time outside of the house. Whenever coworkers tell me, "I just don't know how you do it with two kids," I seriously want to cry. Because I do know how I do it. I do it at the expense of me and my health. I do it with constant guilt that burrows into my every fiber and eats at me relentlessly. I work full time and I miss my kids' recitals and in-school events because women are the only one who are forced with "making a choice." And, one of the most troubling aspects of this ordeal is that women are the first ones to tell each other, "Well, working full time is the choice you made." And, while that may be true for some women, others are just trying to get by. And even if mothers who work outside of the home are consciously choosing to also have careers, why isn't American society making it easier for mothers to be both parents and contributing members of the workforce. Why tell women they can "have it all" and then rip them to shreds for trying? Why make it so damn difficult?

But I can't explain all this to an excited child who just wants to perform in front of his parents. I wouldn't even know where to start.

According to the U.S. Bureau of Labor Statistics, as of 2016, approximately 70 percent of women with children under the age of 18 work outside of the home. Furthermore, approximately 65 percent of mothers who have kids under 6 work outside of the home. For married couples with children, 96.8 percent had at least one employed parent, and 61.1 percent had both parents employed. More and more parents are working and finding other coverage for their children. These institutions that parents trust, mainly because their choices are limited, are the same institutions that are putting parents in difficult situations, making parents feel like they have already lost the battle, and forcing parents to choose between their careers and their children.

So, I have to make a choice, and it's one I do not want to make, but am sure I will be forced to consider again and again and again. Until our society values working mothers as a whole, and makes it easier for women to reproduce and maintain their careers, I will consistently face the impossible decision: my work, or my kids?

This time, though, my choice was clear. As my colleague put it: "[I knew] what I need to do." I requested the day off. I chose my kid. But many parents don't get that choice. They have to be at work. They can't afford to lose a day's wages. They are responsible for the entirety of their family's finances. And, that is just unfair. So, what are we going to do about this? Because I refuse to accept this as a continued norm. Parents should not have to choose between their families and their careers.