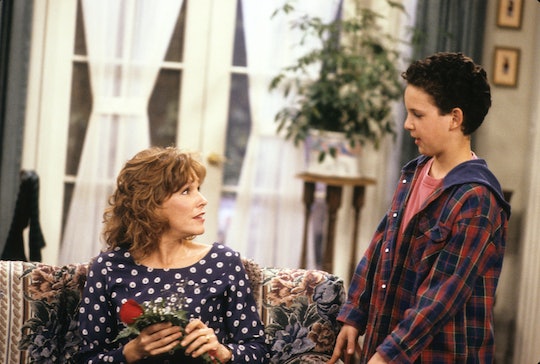 Growing up in the '90s, there were several staples in my life: a rainbow collection of scrunchies, a pantry stocked with Dunkaroos, and a daily dose of Boy Meets World on TV. Despite being such an avid fan of the show, there were two characters I paid very little attention to: Cory’s parents, Amy and Alan Matthews (played by Betsy Randle and William Russ, respectively). Because Boy Meets World was centered so tightly around Cory's view of the world, his parents were on the periphery as he grew up.

The ABC sitcom, which premiered in 1993, was a constant throughout my childhood. I was a few years younger than Cory Matthews (Ben Savage), and as I grew up right alongside him and his best friend Shawn Hunter (Rider Strong), their lives always felt like a preview of what could be in store for mine: high school drama, potential romance, and friendships capable of transcending years. But all the drama and the risks that Cory took were possible because the world was steadied by his parents. Nothing was ever going to go terribly wrong for Cory; his happiness and success were pretty much a given.

I was a middle schooler at the height of my Boy Meets World obsession — and I wasn’t alone. My friends and I would pass notes in the hallways, using “Cory” and “Shawn” as code names for our crushes, trying to grow our hair as long as Topanga’s. In a nutshell, Boy Meets World wasn’t just a show: it had captured our 11-year-old hearts unlike anything else at the time, and we cared about the characters as though they were our friends IRL. And in our real lives, our moms also existed mostly as supporting characters, secondary to our school or relationship dramas, appearing only when we needed a ride, someone to sign a permission slip, or occasionally, a hug. Thinking of them as fully formed humans with their own dreams and passions would never have crossed our minds.

Today, Boy Meets World still holds a special place in my heart; I’ll watch reruns of it any chance I get. But as a married woman with a family of my own, I can’t help but view the series differently than I did all those years ago. While I once watched with the mindset of a preteen also longing for independence, motherhood has undoubtedly become the lens through which I currently experience the world — and I’ve found myself noticing things that I didn’t notice before.

As early as the show’s pilot, Amy is established as a pretty inspirational mom: she’s tough at times (like when Cory gets detention for not paying attention in English class), and compassionate at others. In addition to raising three kids, Amy is a real estate broker. She seemingly “does it all” with only the slightest hint of chaos, and is often seen rushing around in the mornings, grabbing school permission slips from the fridge with one hand and organizing her briefcase with the other.

Despite what I may have thought as a middle schooler, Amy isn’t just a mom; she has an identity of her own.

But she’s pretty damn funny, too. When Cory threatens to move out in the pilot because he’s angry that his parents took Eric’s side during a fight, she plays right along and the scene soon turns into a teachable moment. Amy helps Cory understand that Eric is simply building relationships outside of his family, and not abandoning his brother. "There’s no bad guy," she says. "It’s natural that people grow up and priorities change."

Despite what I may have thought as a middle schooler, Amy isn’t just a mom; she has an identity of her own. Perhaps the best example of this occurs during the Season 1 episode titled "Once in Love With Amy." Cory, Shawn, and Eric begin to suspect Amy of having an affair after realizing she’d been lying about attending a weekly bowling league. The evidence? Her “bowling bag” held zero bowling balls; instead, it contained a slinky black dress, red heels, and the card for a fancy restaurant.

At Shawn’s suggestion (“Don’t you guys watch NYPD Blue?!”), Cory and Eric follow Amy to the restaurant where they spot her with an unidentifiable man. Of course, this is a family-friendly show, and Amy isn’t actually caught cheating. Instead, she’d been meeting her husband in secret for a weekly romantic date. (A similar plot twist plays out in Season 5 when Amy and Alan get a hotel room and role play as strangers — the same hotel where Cory, Topanga, and the others are celebrating their after-prom. Awkward.)

Initially, Cory can’t understand the reason for Amy’s deception. “It feels like you guys were trying to get away from us,” he tells her. In response, Amy explains that she loves being a mother, but that’s not all of who she is. “I have a career, and I’m madly in love with my husband,” she says, adding — much to Cory’s horror — “Your father and I work very hard to keep our relationship fresh... we want to stay hot for each other.”

As a kid, I’m sure I was as uncomfortable as Cory while watching that exchange, but today, I get it. Like Amy, I love being a mother; my daughter has brightened my entire world, and I feel like there are parts of my heart that I never even used until she was born. But I’m also still the person I was before becoming a mom; I’m every version of myself that I’ve ever been, made up of a million tiny layers, all of which are valid and worthy of care. Focusing on herself and her marriage doesn’t make Amy a bad mother; in fact, it probably makes her a better one.

It’s understandable that I once viewed Amy as “the mom on Boy Meets World” and nothing else. After all, when we’re kids, it’s easy to see adults as one-dimensional figures, with identities crafted in relation to us. Mother. Father. Teacher. Doctor. We forget, or maybe we simply don’t realize, that these are people, too, with histories, passions, and challenges of their own.

In re-watching Boy Meets World now, I understand that those clues were there all along; I just failed to notice them. Of course I did. But I’m sure Amy, with her wisdom and sage advice, would understand. As she tells Cory during their heart-to-heart: “When you’re an adult, you realize that not everything is as simple as right or wrong. Sometimes, there are gray areas.” Motherhood is a gray area in and of itself, something that it might take actually becoming a mother to fully understand.

With that, there's also the realization that my daughter will eventually see me the way I saw Amy, the way I saw my own mother. I'm a star in my daughter's world now, but one day I will play that supporting role, existing solely on the periphery of her existence. While the idea of it stings and makes my heart feel heavy, I can't be upset with her; it will only mean that her world is full of color and excitement, making it hard for her to stop spinning long enough to pay attention. In many ways, it's to be expected; it's how it's supposed to be. Having been on the other side, I know: she'll understand one day, just like I do now. And when she does, I'll be there to fill whatever role comes next.