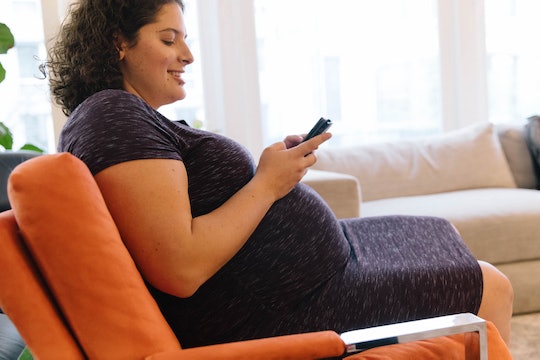 As I sat at a bar, with my club soda, one night when I was about seven months pregnant, my friend asked me if my husband and I had started interviewing nannies. I was dumbfounded. Did people really expect us to have all the details of new parenthood totally figured out this far in advance? I mean, I’m a planner, but booking childcare six months early felt like I might jinx the whole situation. So I feel confident saying there's a question you're forgetting to ask a woman in her third trimester, and it's not about her future childcare plans. Because while I appreciated my friend’s concern, I would have preferred a different question. One that didn’t make me spiral into worry and self-doubt, since my partner and I had not even begun to figure out what our childcare situation was going to be after my 12-week (mostly unpaid) maternity leave would end. With her question, she was assuming we were going the nanny route when, in fact, we hadn’t even nailed down names we could agree on.

More Like This
9 Things Not To Say To A Pregnant Woman On Mother’s Day
Lightning Crotch Can Actually Tell You These 7 Things About Your Pregnancy
Your Guide To Swimming Postpartum
Therapist Says: Alone Time For Moms Is A Necessity, Not An Indulgence

Hers wasn’t the only pedantic question asked of me when I was pregnant. So many people wanted to know so many rudimentary things before our baby was born. Disposable diapers or cloth? Bottle or breast? “Natural” childbirth or medicated? I could not figure out why so many people felt compelled to know so many things that had to do with our child before he or she even arrived.

Did people really expect us to have all the details of new parenthood totally figured out this far in advance?

And while I don't have scientific evidence to back up this theory, I think people ask these questions because they want to know how they measure up. I understand how difficult it is not to constantly compare yourself to other parents. I have gotten better about it, since it was not good for my mental health, but I still fall into the trap of seeing how my parenting skills measure up to those around me. I desperately need to know if it’s just my kids who can’t seem to get through a meal without littering the floor below them with food detritus… and they are 7 and 10 years old.

I also think people were hellbent on completing some fact-finding mission when they’d ask me about my unborn child, because they truly view the whole baby as a miracle. And as a woman having a geriatric pregnancy, I must admit that it was particularly remarkable that I was embarking on this journey at my advanced maternal age (35). I can sort of understand why friends and family, and occasional strangers, would lose their sense of boundaries when asking me what my various plans were for adapting to life with a new kid. I worked full-time, so people asked if I was going to go back to work after maternity leave (yes). My partner and I lived in New York City, and everything was expensive, so how were we going to afford even raising a child (see previous answer)? And the most popular question: what were we having? (A human.)

I would love to be allowed to paint an eternally optimistic future for my children, because I don’t think it’s a waste of time and energy.

But the nanny question was the one that really threw me. I found it hard to believe that my friend expected us to have the answer so soon, months before my partner and I would actually need childcare. I was naive, though. I wasn’t talking to enough pregnant New York moms, because if we had been I would have started the search before even conceiving the baby, just to make sure I could book the most perfect caregiver, or the best daycare facility, since both are in super high demand. Plus, the longer you wait the more you pay, or worse, the less likely anyone or any place that feels like a good fit will be available.

So, grateful as I should have been to my friend for raising the red flag that my husband and I should really be getting on that childcare search by then, I would have liked to have heard a completely different question from her.

One thing I never got asked, but would have loved it if I did, was: “What are your hopes and dreams for your baby?”

It’s an open-ended question: one without a singular correct answer. It’s an opportunity for me to imagine a perfect universe for my baby, which is the only thing I truly want (and the only thing I know we truly won’t get). Late in pregnancy, as I would anticipate my child’s arrival more with every day, imagining a perfect future for her (or him) was a much-needed escape. Before having kids, I hadn’t realized that my opportunities to daydream would be severely cut short once I became a mother. I have a very active imagination, and always have, and it’s been my method of escapism. I haven’t been totally cured of that since welcoming our children, but I do crave more time to fantasize of all the ways I could, in an alternate (and less misogynistic) world, provide for my children.

Next time you’re inclined to drill her on everything she should, or shouldn’t, be doing to prepare for a baby, maybe ask her something that has nothing to do with feeding schedules.

I would love to be allowed to paint an eternally optimistic future for my children, because I don’t think it’s a waste of time and energy. We all need to think big for our kids, and keeping the conversation small — diapers, swaddling techniques, pacifiers — does parents like me a disservice: it doesn’t permit us to see past the rut of childcare tasks. I could not be a parent who only thought about the hands-on labor and routines of raising a child. I wanted to invite loftier thoughts to the experience. I wanted to imagine the perfect penthouse apartment without downstairs neighbors complaining of the little feet running, and the sunny, unencumbered summer days where the kids ran around the beach without needing sunscreen reapplied every two hours. I wanted all those snapshots in Land’s End catalogues to come to life, as my life.

So give a very pregnant woman a break. Next time you’re inclined to drill her on everything she should, or shouldn’t, be doing to prepare for a baby, maybe ask her something that has nothing to do with feeding schedules. Try asking her what her fantasy new-mom life looks like. Even if she’s never given it a thought, it will at least prompt her to get out of her head, and push the anxiety of impending parenthood aside for a moment. Everything seemed life or death to me when I was planning for a baby, because my baby’s life pretty much depended on me. It was freeing, and a relief, to daydream about a baby who always smiled, never cried, slept through the night immediately, and never made me question my ability as a mother.

Because that sort of stuff only happens in dreams.