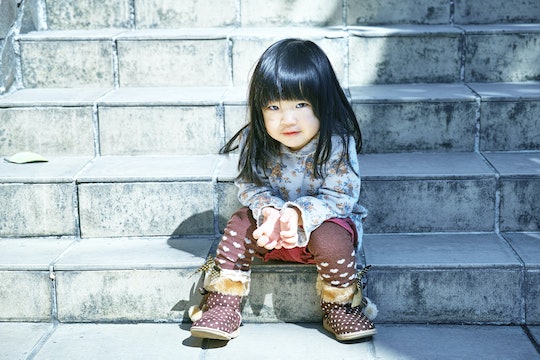 Long before I had my son, I would always hear parents dismiss the harsh or downright rude things their kids said, simply because they're kids and "don't know any better." But now, as a parent myself, I see that it is up to us as the adults in charge of guiding these tiny lives to not just write off what kids say, but to take these moments to teach them. This is especially true when it comes to things kids say about their own bodies and other people's bodies. How you teach your child to love themselves, love their body, and respect all bodies of other people is up to you, but the way I see it, consistency and open mindedness is key.

Even when they're little, there's no reason why we can't teach respect at a young age. Honestly, the younger kids are when they start to understand the basics of how they should treat themselves and others, the better. Not only is it important for your kid to respect the bodies of others, but to also love their own body. You can teach your child to love themselves by showing how much you respect your own body and admire others openly, rather than letting little critical comments drop, even behind someone's back. You know, the whole lead by example thing.

But outside of all the little things you can do to raise body-positive kids, the one thing to know about teaching your kid to love their body and respect the bodies of others is that it pays to be consistent.

The one thing to know about teaching your kid to love their body and respect the bodies of others is that it pays to be consistent.

It's so easy to think of teaching body positivity (or anything else) as a "set it and forget it" kind of thing. Like, if we just tell our kids the basics of how to not be a jerk to other people (in this or any other respect), shouldn't they just hear us, get it, internalize it, and we can all move on with our lives as more well-developed, respectful, evolved, happy humans? I mean...no. Haha, that's not how kids work (is something I often have to remind myself). They're sponges, but do you know what sponges do after the soak up everything around them? They let it all fall out again. They have to reabsorb constantly. Getting this idea into our heads that ew can teach kids how to love themselves and respect the different shapes and appearances of others, and then go weeks without reinforcing this idea? It's like we're wasting our energy.

Instead making sure your kids really grow up with an intrinsic understanding of interpersonal respect and bodily autonomy and acceptance, the messages that will instill those ideas need to be a matter of routine — not one-off lectures. Which brings us back to the whole "lead by example" thing: There's really no getting around the fact that, if you want to continue to reinforce how important it is to love and embrace your own body, you have to actually believe it and live it. If you can, your kid is that much more likely to have that sort of behavior ingrained in their mind.

Likewise, it is absolutely important to bring that idea over to how kids might see others. All bodies are different, and since kids are naturally pretty quick to see differences between people, be quick to point out how special it is to be born different from one another, and how awesome it is that all sorts of bodies exist, and that they're all truly great and valuable.

There is a reason why every class in grade school and even middle school has a "fat kid." And it's mainly because not enough kids are being taught how to love their bodies and respect all other bodies. Instead, these kids find themselves either quick to judge others because they were never told any differently, or projecting because they were never taught to love their own imperfections.

To teach your child to love themselves, the best any of us can do is try to start early and stay in the mindset of body positivity and general acceptance and celebration of all bodies yourself. If your kids see you loving your body and showing respect for all other bodies, it helps drive home the whole idea that you're trying to impart on them. If you're worried about focusing too much on their physical appearance, it helps to remember that regardless of whether or not you teach them how to love their body, they will, at some point, turn their focus on themselves. Do you want them to look at their reflection with the critical eyes of annoyance over their perceived imperfections, or would you rather they see themselves as the sort of person worthy of the love you've been showing them all along?

As much as some of parenting comes naturally to a lot of people, most of it also takes careful planning, especially in the most important areas. The sort of pressure we have as parents to raise these tiny humans into acceptable full-sized humans is very real. But you don't get body positive and open-minded kids by throwing them out into the world and just hoping they learn to love everyone, including themselves. The bummer reality is that most messages your kid is likely to come across out in the world will be ones of hate, doubt, and divisiveness. To teach your child to love themselves, you have to be the one spearheading that mindset — and the best way to do so is to be consistent in the ideas that everyone is naturally different and naturally beautiful and always completely whole and valid, whoever they are.