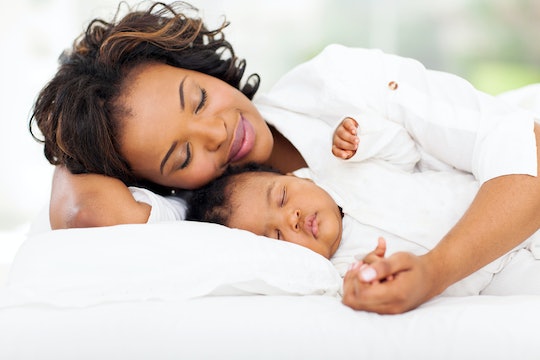 If you can believe it, just a decade ago co-sleeping was rarely if ever discussed. It's become increasingly common, however, to choose to co-sleep, instead of putting your kid in a crib in another room come hell or high water. That said, it's a practice that still isn't widely accepted and there are so many myths about co-sleeping that, well, the topic can be difficult to discuss. Feelings can get hurt and accusations can be made and in order to avoid all of the above, there's one thing you shouldn't say to moms who co-sleep. Of course, people should feel free to express themselves and share their beliefs, but those expressions and beliefs should stop when they start to hurt others.

While caring for a baby's safety is never a bad thing, no co-sleeping mother needs someone to tell her how "unsafe" it is. Accusing a mother of doing something that knowingly puts her baby in danger isn't helpful, even if it comes from the best of places and is said with the best of intentions. Telling a mother that she is doing something inherently wrong, instead of asking her how she is managing to co-sleep or inquiring further, is hurtful. There are so many ways you can help a co-sleeping mom, but telling her that her choice isn't a safe one, isn't one of those things.

While caring for a baby's safety is never a bad thing, no co-sleeping mother needs someone to tell her how "unsafe" it is.

When a mom is co-sleeping with her baby, it is probably for one of two reasons: either she has thoroughly researched the idea, and knows the risks and benefits of co-sleeping and has made an informed and knowledgable decision, or she has a baby that is up at all hours of the day and night (perhaps because of breastfeeding, perhaps because of colic), and she is co-sleeping out of sheer exhaustion. Yes, sometimes co-sleeping is an act of survival, as it definitely was for me.

Both of my children ended up co-sleeping with us accidentally. My first baby hit one of those dreaded sleep regressions when she was six months old and would cry until she threw up, even when I was right next to her. Skinny kids at the bottom of the growth curve can't afford to throw up that last breastfeeding meal of the day, so I brought her into bed with us. She stopped crying and stopped throwing up and, for us, co-sleeping was the solution to our sleep regression problem.

Nearly two years later, I was pregnant for a second time and ready to tell the world that I would not be co-sleeping again. While co-sleeping helped my daughter sleep, I had to endure flying fists and tiny little feet and, well, little-to-no room in our shared bed. It had been hard on my own sleep, and I wanted to sleep next to my husband again. We purchased a fancy convertible crib that had a smaller footprint, and things were going great, until my son was five months old and came down with bronchiolitis for several weeks. His sleep was impacted dramatically, as he had trouble breathing when he was laying down, and it turned out that the best position for him was on his front and on an incline. So, in order to help my baby breath and sleep, he slept on my chest for two weeks.

Like I mentioned before, I was determined not to have my second child co-sleep, so once he recovered from his illness, I worked on getting him back into his crib again. I lost a lot of sleep during that time, but succeeded, only to have him contract bronchiolitis again, just two months later, at the same time as another teething session was starting. This second time, I tried half-heartedly to get him back into his crib, but eventually I just gave up. Five of us (my husband and I, my teenage stepdaughter, my three year old and the baby) were living in a tiny, 900 square foot home with paper thin walls, so every moment of crying in the middle of the night had me anxious that someone would wake up. In the end, it just wasn't worth it for me to keep waking up every 45 minutes to rock my son back to sleep.

I was made to feel like I was a "bad mom" or a "lazy mom" or an unfit mom that cared more about her sleep than the safety of her children.

During both of these experiencing, and even after, I had to endure people telling me about how dangerous co-sleeping was. People regurgitated the statistics of children who die while co-sleeping with parents, I guess as a way to scare me into an alternative way of having my kids sleep. Would I ever tell a mother who just enrolled her child in a contact sport, the statistics of kids' concussions from playing football or hockey? About the potential for longterm physiological damage that certain sports can have on children? Of course not, because that's not helpful, it's terrifying and horribly rude and nothing even remotely close to what a mother needs to hear.

The constant warnings (even when they were shared with the best of intentions and sincere concern) weren't helpful, they just made me more anxious (at a time when I was suffering from and being treated for postpartum depression and anxiety). I was made to feel like I was a "bad mom" or a "lazy mom" or an unfit mom that cared more about her sleep than the safety of her children. Very rarely (if ever) does a co-sleeping mom fit any or all of those descriptions. Instead, those mothers are well-informed, heavily researched, knowledgable mothers who are are exhausted, and they need your support, not your judgement.

Regardless of the reasoning behind a mother's choice to co-sleep, she likely knows full well what the risks are and has spent a significant amount of time weighing them. Reminding her of them will either make her more anxious about a situation she feels backed into (especially if she's exhausted and out of ideas as to how to facilitate her child sleeping for longer than an hour), or angry that you don't trust her judgement regarding her own children.

In the end, bringing up the dangers involved in a personal parenting choice like co-sleeping will only upset the mom you are talking to, and potentially alienate them. Trying to understand why this mom is co-sleeping is a far more productive approach, especially if this is someone you want to maintain a friendship with. Because let's face it: being told you're doing something that may hurt your child is kind of the last thing any parent wants to hear, right?

More Like This
Here's When Your Baby Might Start Sleeping Through The Night For Real
Here’s What You Need To Know About That Viral 1960s Baby Formula “Recipe”
Ashley Graham On The “Fun, Organized Chaos” Of Raising Twins
These Stepmother's Day Instagram Captions Are Straight From The Heart