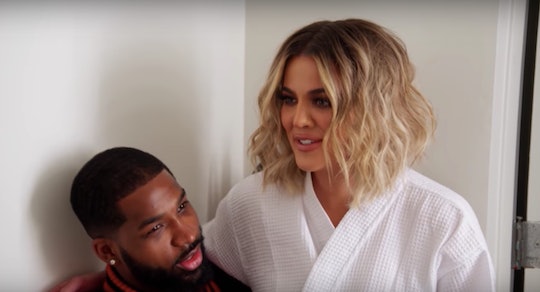 Ever since the rumors first broke back in September that Khloé Kardashian might be pregnant, fans were convinced that there was some mastermind, namely Kris Jenner, planning the release of this coveted information. But it turns out that that wasn't the case at all. In fact, the story behind Khloé Kardashian's pregnancy reveal photo is much more simple than that and wasn't coordinated for ratings or to sell the world something, as some cynics will always suggest when it comes to this family.

Khloé wrote in a blog post available via her app that the now-iconic photo of NBA player Tristan Thompson holding her growing up came out of nowhere. She explained, "One day when he came home from practice, we decided to just do it!" But what about the artistic nature of the photo? Turns out, that was all by chance. She said that their friends Simon and Savas took the photo and that her own makeup artist was helping out with the placement of the hands so that the bump was in full effect.

"Simon took the photo and Savas was on the phone with Hrush and they were directing the placement of our hands," the Good American designer added. And the only reason they cut off their heads was because "we both looked crazy, LOL."

The mom-to-be added, "Everyone thought this was some strategic picture, but in fact I think we got it done in 20 seconds — and it was just done by us."

Khloé dropped the picture at the height of the "are Koko and Kylie really pregnant" hype just before the Christmas holiday and after they didn't confirm or deny the pregnancy rumors on the Keeping Up With The Kardashians midseason finale.

At the time, remember, fans were getting daily pictures of the family via their annual Christmas card. Kylie Jenner was nowhere to be seen and in all the pictures that Khloé appeared, she didn't "look" pregnant. Not that there is every one way to "look pregnant" or that fans had any idea of how far along she theoretically was, but people were pretty skeptical. So when she shared the pregnancy reveal on Instagram on Dec. 20, it was a huge deal. She captioned the random picture moment:

Khloé had been toying with the idea of kids for some time. On last year's season of Keeping Up With The Kardashians she and her sister Kim Kardashian went to a fertility clinic to see what was happening. Khloé, then 32 years old, just assumed she might even already be pregnant and was even joking about the idea of being Kim's surrogate. But Dr. Huang, the family's fertility go-to, told her that her follicles, or the things that hold a woman's eggs, were on the low side for a "normal 32-year-old." Khloé was visibly worried, "This is definitely not how I thought this appointment was gonna go. What if I can’t get pregnant?"

It was especially sad for fans, too, since Khloé is the one sister who often talked about wanting to be a mom and having a huge family one day, just like her own. She always seems to be on camera playing with her nieces and nephews, too. Not that being "good" with kids means you have to have them, but it was just always there in the background somehow. So when she finally confirmed that she was pregnant on Instagram, it was extra exciting all around.

So even if the pregnancy was a surprise and nothing about the release of her first pregnant photo was planned, having a baby was always in the stars for Khloé. Everything usually works out in the end, right?