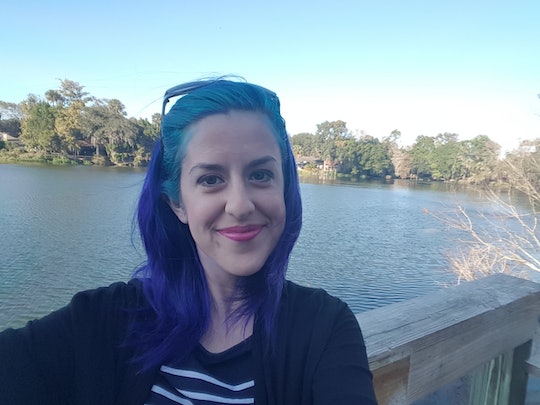 The Stanford Rape Victim's Letter Said What I Couldn't

Unless you've been living under a rock or you went without Wi-Fi on a camping trip or something, then you've probably already heard about the Stanford rape victim's letter to her attacker, 20-year-old Brock Turner, who was convicted of sexual assault. In her letter, the Stanford rape survivor articulated not only her brutal attack, but the devastating consequences it's had on her life. For many, the letter might've marked the first time they'd heard such a detailed and unflinchingly honest account of what it was like to be violated. For me though, it was both familiar and strange. I knew how it felt to want to crawl out of your own skin, but I had never had the experience of seeing my abuser stand trial because I never reported my abuse. Though Emily Doe, a fake name given to the 23-year-old survivor, couldn't offer much first-hand information on the assault itself because she was unconscious, her brilliant, poignant, profound letter to Brock Turner at his sentencing set such a solid foundation on which her bravery stands — bravery that so many survivors, myself included, desperately wish they'd had.

I was 9 years old when my friend's older brother first sexually violated me, and I was on the cusp of becoming a teenager when it finally stopped. I endured over three years' worth of abuse, but never reported it because I was raised in an environment that preferred to turn a blind eye to my pain. Instead, my parents and others in our community felt they could do a better job of "resolving" incidents than any outsider ever could. Growing up where my family's religion superseded all and God was seen as a higher authority than any court, I didn't know there were other options; I was still just a kid. Because of that, my attacker will never have to answer for what he did and will never set foot in a court room. He'll never hear the story of my pain or how his continued abuse changed my life. He'll never have his face plastered across the internet, be made into memes, or have petitions written in favor of punishing him. He'll never be denied a job or worry about where he can live or what neighborhoods he should stay out of since he didn't have to become a registered sex offender.

I've looked my abuser up on Facebook before. I have a tenuous relationship with his family. My mother and his mother have known each other for decades, and my little sister and his youngest sister basically grew up together. Though both my mother and my sister are now aware of my past abuse and share in my disdain for my abuser, I can understand that it's difficult for them to sever decades-long relationships with people who were essentially not involved. I've been civil, but I have no interest in nurturing any kind of relationship with anyone from his family. I don't know how to forgive the very people who refuse to apologize or even acknowledge what has happened to me. So a "People You May Know" box on my NewsFeed is the only time I ever see their faces.

But when I saw that my abuser worked in the field of home security, I ran to the bathroom and vomited. All the feelings I thought had been locked away over a decade ago came flooding back with a vengeance. The anxiety, bitterness, and seething hate gave way to an intense feeling of guilt. Oh, God, I thought. What if I had pushed harder to have him punished? What if he's attacked again because I didn't scream it from the rooftops?

After the first time I was held down, stripped, and treated like a science project, I just wanted to pretend it didn't happen. His lack of empathy and the way he moved his hands over my body with such calculated severity were the hardest to block out. The second time, I was mad and threatened to tell on him. Without hesitation, he replied that he would do the same to my sister if I ever told. And I believed him.

As I collected myself, putting my tear-soaked bangs behind my ear, avoiding eye contact with my reflection in the mirror, I realized all I felt was numb. My legs felt like cement and my face drained of blood. I knew, for the first time, there was literally nothing I could do. The statute of limitations was long gone, and I had no evidence except my words. I had burned any accounts I kept of the incidents because it felt therapeutic at the time.

When I'd shower and see the bruises he'd left behind, I'd imagine they weren't there. I did anything I could to trick my brain into thinking I was watching a horror movie instead of starring in one.

After the first time I was held down, stripped, and treated like a science project, I just wanted to pretend it didn't happen. His lack of empathy and the way he moved his hands over my body with such calculated severity were the hardest to block out. The second time, I was mad and threatened to tell on him. Without hesitation, he replied that he would do the same to my sister if I ever told. And I believed him. As the weeks turned into months, I developed a habit of closing my eyes and pretending I was somewhere else. When I'd shower and see the bruises he'd left behind, I'd imagine they weren't there. I did anything I could to trick my brain into thinking I was watching a horror movie instead of starring in one.

I was about 12-and-half years old when I decided enough was enough, and if it meant I had to keep my sister by my side 24/7 to prevent him from hurting her, so be it. I told my father and that's when I learned that the community I lived in valued privacy and reputation over my safety. Naively, I thought I'd feel some huge relief or newfound sense of bodily autonomy after reporting the abuse. But instead all he told me was that the adults would "handle things," and I knew better than to argue. As soon as my abuser turned 18, he was gone, and that was the last time I ever saw him in person. Maybe that freedom was supposed to feel like a victory. Instead, all I felt was hollow.

In the letter the Stanford rape survivor Emily Doe wrote, she spoke about how she felt shortly after her attack:

I stood there examining my body beneath the stream of water and decided, I don’t want my body anymore. I was terrified of it . . . I wanted to take off my body like a jacket and leave it at the hospital with everything else.

And those words hit me with such force and commanding power. Her description of her rape and what happened in the days, weeks, and months since was so accurate that, even though I would never wish that suffering on anyone, it was comforting to know someone else knew and understood my own mix of disgust and fear. Even though her rapist was prosecuted and convicted of his crime and my own abuser was not, I felt vindicated that someone else could give voice to what happened to me and what happens to so many women — and men. Though I was spared from having my story picked apart piece by piece and inch by inch by people who didn't know me and assumed I was lying, I'd still gladly trade my private shame and guilt for a day in court.

But what struck most was the way Emily Doe beautifully and optimistically closed the letter. Her conclusion reminded me I am not a victim, I am a survivor and soon-to-be thriver. She wrote,

I hope that by speaking today, you absorbed a small amount of light, a small knowing that you can’t be silenced, a small satisfaction that justice was served, a small assurance that we are getting somewhere, and a big, big knowing that you are important, unquestionably, you are untouchable, you are beautiful, you are to be valued, respected, undeniably, every minute of every day, you are powerful and nobody can take that away from you.

Though I don't know her real name, I wish I could thank Emily Doe for offering validation and truth to survivors of assault, myself included.

Doe's letter did what I wished I could have done all those years ago: it put the blame squarely on the abuser, showed that the victim is the one who has to deal with the impact of their attacker's actions, and that it's about damn time society and the justice system realize consent is the only thing that separates sex from rape. When I get upset, wishing I could turn back the clock and do things differently, I take a step back. Sexual assault and how a person is able to survive it are not one-size-fits-all situations. There is no script for how you're supposed to behave or what you're supposed to feel. Everyone experiences it differently and there is no right or wrong way to feel about being assaulted. I know that now. I know, from commiserating with my male best friend who was raped, from talking in support groups online with people I'll never meet, and from nights spent staring at my own ceiling, that I am the only author of my story.

On January 17, Doe was unconscious and incapable of giving consent. Yet she was assaulted. All those years ago, I was a minor and in the eyes of the law, also incapable of giving consent. Yet I was continuously sexually abused. Though I wasn't rescued by two Swedish students on bikes and my abuser wasn't convicted and sentenced at trial, Doe's words are so important to me. I didn't report my assault, yet I survived. And I will never, ever forget that.